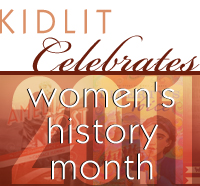 This year, I am excited to link up to the first official Kidlit Celebrates Women's History Month celebration, organized by myself along with fellow blogger/librarian Lisa Taylor of Shelf-Employed.  Please make sure to check it out at http://kidlitwhm.blogspot.com.  We will be having posts from a variety of authors and bloggers all month, including Kathleen Krull, Sue Macy, Carolyn Meyer, Tanya Lee Stone and more.  Don't forget to sign up to "follow" the blog or to receive the posts through RSS feeds or e-mail so you don't miss any of the sure-to-be terrific entries.

As part of my own celebration of Women's History Month here at The Fourth Musketeer,  I have read a variety of picture books on women's suffrage, having realized (much to my personal embarrassment!) how little I knew on a topic that is so central to women's history.  I don't remember ever learning anything much about this subject in school, so I have had to educate myself on this fascinating topic.  And what better way than with some fabulous picture books from contemporary authors!  All of these recommended titles are easily available through your local public library or bookstore.  My entry today is about Elizabeth Cady Stanton, who for over fifty years played a leadership role in the women's rights movement.
Elizabeth Leads the Way:  Elizabeth Cady Stanton and the Right to Vote, by Tanya Lee Stone (Henry Holt, 2008).

In this book suitable for early elementary school-aged children, Tanya Lee Stone paints a colorful picture of one of the leading figures in the fight for women's rights, Elizabeth Cady Stanton.  Delightfully illustrated in a folk art style by Rebecca Gibbon, the story of Elizabeth's life is told in simple language that is accessible for the youngest readers.  The author begins with an illustration of Elizabeth Cady Stanton as an elderly woman, and draws us in right away with this provocative text:

you can't be what you want to be

Would you ask why?

Would you talk back? 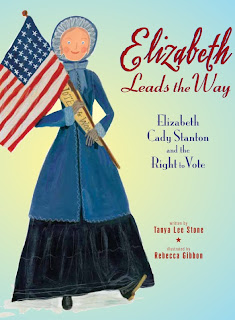 We see Elizabeth growing up, horrified by the injustices done to women, and committed to being able to do anything a boy could do, including excelling in Greek, French, math, and religious studies.  When she married Henry Stanton, an ardent abolitionist, she told him she wouldn't give up her name but would add his to her own.  Elizabeth became one of the organizers of the Seneca Falls Convention, the first large-scale meeting discussing women's rights, particularly their right to vote.  She was widely criticized for her boldness, but as Tanya Lee Stone states in concluding her book,  "Elizabeth had tossed a stone in the water and the ripples grew wider and wider and wider....She changed America forever."
An Author Note with additional biographical information and a list of sources are included.
While this book doesn't provide lots of details on Elizabeth Cady Stanton's life, it is a good starting point for young readers to explore the beginnings of the women's movement.  Its attractive format and brief text are likely to create further interest in this pioneer of women's rights and her circle.

Later this month I will be reviewing an excellent new book (it will be published in May) for young people by Penny Colman, Elizabeth Cady Stanton and Susan B. Anthony:  A Friendship that Changed the World.

Hi Margo, Looking forward to all you have to share this month! Double check your kidlitwhm link; I don't think it goes where you want it to.