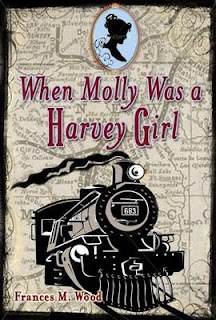 
I was excited to pick up an autographed copy of this delightful historical fiction book for children at ALA-Midwinter in San Diego, since it had been on my radar for a while but I hadn't managed to get a hold of the book.   I was not disappointed in this fall 2010 release set in the Wild West in the 1890's that's a perfect choice for Women's History month.

When young Molly and her older sister Colleen are left penniless after their father's death, Colleen decides to answer an advertisement for the following:  "Young women of good character, attractive and intelligent, eighteen to thirty, to work in Harvey Eating Houses."  Although Molly's only thirteen, with her hair up and dressed to look older, she and Colleen are hired and sent from Illinois to far-off Raton, New Mexico--the ends of the earth as far as Molly is concerned, and to an area she is convinced is full of Western desperadoes with evocative names such as Rattlesnake Sam and Cockeyed Frank!

Because trains at the time didn't offer meal service, Frank Harvey had founded a chain of restaurants along the Santa Fe lines, offering good food and a hot meal at a reasonable price.  The educated, respectable young women hired from all over the country were a key part of the "brand," and made waitressing into a respectable profession.  Girls were paid a salary, provided with room and board, and subject to strict rules about behavior with the largely male customers, curfews, and uniforms.  Most came for adventure--and to find a husband, too.


When Molly first sees the highly efficient Harvey girls at work, she's exhausted just by watching the waitress's "Herculean efforts."  Molly muses that the young woman "accomplished more in a half hour than Molly had ever accomplished in a day."  But soon both Molly and her sister are more than adequate as waitresses.  Molly, though, still hopes to get back to Illinois, and develops a scheme to get her sister married to one of their customers, Mr. Latterly, a traveling salesman who admires her attractive sister.  In the meantime, Molly develops a friendship with the magnificent French cook, Gaston, who teaches her about cooking, and his helpers, Josiah, who's part Indian, and Susana, who introduces Molly to Mexican culture.  And let's not forget Genius Jim--a notorious outlaw, who also weaves in and out of the story, providing an amusing surprise ending.

Will Molly's schemes work to get her back to her old life in Illinois, or will she stay out West with her new-found friends?

I found this book to be thoroughly charming; the protagonist, Molly, is a character girls will identify with, as she struggles to act like an "adult" even though she is only thirteen.  It's a great story to explore a little-known aspect of women's history; the Harvey restaurants provided a career opportunity for respectable girls in an era when there were very few options.  In addition, as a secondary story, we see the racism and prejudice that existed in the West between different ethnic groups, who were not supposed to mix socially, through Molly's friendship with Josiah and Susana.

Author Frances Wood used her own family history as the basis for this story, since as she reveals in an author's note, her great-grandmother, Jennie, became a Harvey Girl in 1887.  Although her ancestor left no diaries or letters about her Harvey Girl days, the author used other books on the Harvey Girls in her research, and a brief bibliography is provided.

Several other books for young readers have been published on the Harvey Girls.  For another novel for middle grade readers, you can check out Harvey Girl, by Sheila Wood Foard (Texas Tech University Press, 2006).  There is also a charming paper doll book (I see a great gift combo--paper dolls and this novel):  Far From Home:  West by Rail with the Harvey Girls Paper Dolls by Lesley Poling-Kempes.

And of course, while on the subject of the Harvey Girls, we can't forget the famous Judy Garland MGM musical The Harvey Girls, with the celebrated song and dance number, "On the Atchison, Topeka, & the Santa Fe," which won the Oscar for Best Song in 1946.

For more about the Harvey Houses on the web, including photos of surviving restaurants, click here.
Posted by Fourth Musketeer at 5:00 AM

I've loved your recommendations for Women's history month -- I've checked out the picture books, and my children loved them. Will be adding this too for my 10 yr old daughter! Thank you again~

Thanks so much! It's a great one for your 10 year old--and afterwards you can watch the Judy Garland movie!