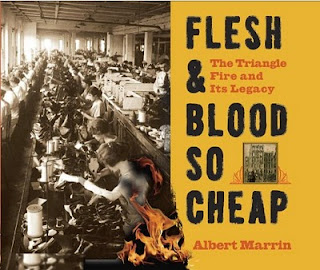 
Friday, March 25 is the 100th anniversary of the Triangle Fire, one of the worst industrial disasters in American history.  Quite a few books for young people have been published on the topic, both historical fiction and non-fiction.  The most recent, just released this spring by award-winning non-fiction writer Albert Marrin, brings the tragic events of that spring afternoon to life by setting the fire in a sweeping historical narrative that encompasses not only the events that led up to the fire, but what happened afterwards.

In a moving preface, Marrin sets the stage for the disaster, describing the beautiful spring day as would have been experienced by Frances Perkins, then a 31-year old social worker (later the first female cabinet member under FDR) who witnessed the disaster first-hand, changing the course of her life forever as she became committed to ensuring that such preventable tragedies would never happen again.

As Marrin points out, the Triangle Fire is part of a much larger story--the story of the greatest mass immigration in history, when millions of impoverished immigrants, mostly Italians and Russian Jews, poured into New York City and elsewhere.  More than 3 out of 4 people lived in poverty, and work in factories and elsewhere was often dangerous--with no safety net such as we take for granted today.  In some detail, with abundant archival photographs and maps, he discusses the reasons this immigration took place, with extreme poverty and natural disasters (including a devastating tsumani in Sicily) forcing millions of Italians to leave their homeland, while poverty and religious hatred pushed the Jews from Russia's Pale of Settlement.  Marrin describes in detail the culture immigrants found once they arrived--not streets of gold, but tenements, squalor, and hard work.

To establish the context for the fire, he also describes the growth of the ready-to-wear industry in New York and the improvements in garment-making technology and changing women's fashions that led to the decline in sweatshops and the rise of the factory.  With jobs moving to factories, suddenly it was easier to form unions, and the same year the Triangle Waist Company opened, so did the International Ladies' Garment Workers' Union.  In 1909, the "uprising of the 20,000" united garment workers in the largest strike by women ever seen until then, finally forcing the public to take notice.  The women's reform movement, led by the wealthy women of the Mink Coat Brigade, provided important support for the strikers.

Was the Asch Building, where the Triangle Factory was housed, a disaster waiting to happen?  Not at first glance--the building was modern and fire-proof, built of steel and concrete, equipped with fire alarms and fire hoses.  The New York fire department was highly trained and nearby.  But safety precautions weren't cost effective for factory owners--sprinklers cost money, fire drills were a waste of time, and workers were considered expendable.

Although the building was fireproof, the contents were not--including the highly flammable fabric, and of course the people inside.  No one knows exactly how the fire started--probably from a cigarette butt tossed into a scrap bin--but within seconds the fire was out of control.  The details are well-known; those who were able to take the stairs from the 8th floor got out alive, yet the 9th floor stairway was locked, trapping those inside.  Workers on the 10th floor, or those who reached it from below, were able to survive by getting to the roof and then over to the next building, but in the meantime those trapped leaped to their deaths, many of them ablaze.  Of 500 employees who report that day, 146 perished, mostly young girls.

Marrin does an excellent job describing the aftermath of the fire as well; outraged citizens' impassioned protests led to the formation of The New York Factory Investigating Commission, which carried out the state's most thorough study of worker safety and health done to date.  Frances Perkins was the chief investigator, and after four years of investigations, the legislature passed 34 groundbreaking new laws, ordering fire extinguishers, automatic sprinklers, fire drills, proper sanitary conditions, and more, as well as hiring 123 full-time inspectors to make sure that these laws were enforced.

Alas, the days of sweatshops and unsafe factories and not behind us, despite these efforts.  In his final chapter, Marrin discusses the "new" sweatshops of New York, where the workers are largely Asian immigrants and Hispanics, and the abysmal conditions of garment factories in the developing world, where conditions much like those at the Triangle Factory continue to exist, leading to disasters such as the 2010 fire at the Garib and Garib Sweater Factory in Bangladesh, which killed 21 workers.

Marrin writes:  "School textbooks usually focus on "famous" names--kings, presidents, politicians, generals--as the shapers of history.  Yet these are only part of the picture.  The names of others, often equally important, seldom get the recognition they deserve...It is as if they had never existed."  In this volume, Marrin takes an important step toward rectifying their invisibility.

Indeed, this book represents the best in narrative non-fiction for young people (or for adults who would like a succinct introduction to the history of the event and the issues raised).  I have already seen some pre-Newbery buzz for this title, and I feel sure that the Sibert Award Committee will be taking a close look at it as well.  It's a must-have for school and public libraries, and an excellent book for adults looking for an introduction to this topic as well as young people.

Many on-line resources as well as books for young people are available on the topic of the Triangle Fire.  Please see my post from earlier this year on Esther Friesner's outstanding new historical fiction title, Threads and Flames, for more details.

Also please surf over to Kidlit Celebrates Women's History Month on March 25 as well, when we will be publishing a moving essay by novelist Esther Friesner about the Triangle Fire and much more.  It gave me goosebumps, and I'm sure you will be touched as well by her reflections.

Among the slew of on-line stories appearing relating to the anniversary, the New York Times City Blog is publishing an excellent series of articles which will appear all this week.  Here are some of the links to date:

Remembering the Triangle Fire, 100 Years Later (this link includes information about events and exhibits going on in New York City)
In a Tragedy, a Mission to Remember
Triangle Fire:  A Half-Hour of Horror
Ask About Labor Laws and Unions in the Fire's Wake
Unnamed Triangle Waist Company Victims Identified
The Liberating Shirtwaist

Several new documentaries on the topic are airing this spring:  HBO has Triangle:  Remembering the Fire, and PBS' American Experience recently aired Triangle Fire, which can be watched on-line at their website.