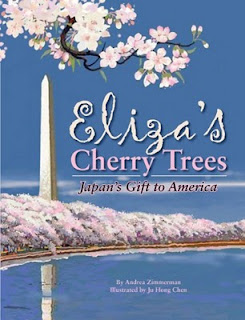 
In the midst of the worst disaster to strike Japan since World War II, it's somehow poignant to recall, through this new picture book, an early gesture of friendship between the two countries:  Japan's gift of cherry trees to the nation's capital.

But do you know the story of how that gift came about?  Andrea Zimmerman's book tells the story of a remarkable woman, Eliza Scidmore, who in the late 19th century, led a life of high adventure, writing about her travels all over the world for a variety of magazines and newspapers, including National Geographic, where she was the first woman journalist.  She was a photographer as well, and took pictures for the Smithsonian.  She even wrote the first guidebook to Alaska.  But she particularly fell in love with Japan and its people, studying Japanese art and learning to speak the language.  Especially struck by the beauty of Japanese gardens, she called their cherry trees "the most beautiful thing in the world."

When Eliza returned home to Washington, she came up with the idea of planting these special trees in the nation's capital.  For years her plans met with plenty of "no's" from Washington bureaucrats; it wasn't until she got the support of the president's wife, Mrs Taft, however, that the trees could be sent.  It wasn't an easy process--the first trees that arrived were diseased, and had to be burned.  Three thousand new trees were sent, however, and were finally planted in March of 1912. [In 1965, 3,800 more trees were accepted as a gift by then First Lady Lady Bird Johnson.]

The trees not only beautified the city, they became an important symbol of peace and friendship between countries.  A famous National Cherry Blossom Festival draws thousands of visitors each spring in Washington.  As part of a number of projects underway to commemorate the 100th anniversary of the original gift, the National Park Service will be sending cuttings from the original trees to the Japan Cherry Blossom Association to be planted in Japan (see article in The Japan Times).

The book features lovely illustrations by Chinese artist Ju Hong Chen.  Back matter includes a timeline, with further biographical details about Eliza Scidmore. An attractive website has also been set up on Scidmore, with a teacher's guide and other resources relevant to the book.

Andrea Zimmerman's recent interview on NPR's show Here and Now can be found at this link.

Would you like to win a copy of this beautiful picture book for your home or school library?  If so, please leave a comment below with your e-mail address.  A winner will be chosen by random number generator on March 31, 2011 and will be notified by e-mail.

These trees are so incredibly beautiful when they are in bloom. It is one of my favorite things to see in DC every year and this from a perons who suffers from terrible allergies 365 days a year. Sounds like a great book that really does justice to these magnificent trees.

Growing up in the D.C. area, it was always magical to be taken to see the cherry blossoms...this sounds like a book that's worthy of them!

Wow, this looks amazing - I'd love to win! meltay at comcast.net

This looks like such a lovely book with cherry blossoms and peace. I would love to win.

What a lovely book.

Sounds like a wonderful book! There's a special place in my heart for Japan after spending a year teaching English there. I've always wanted to see the cherry trees in DC... such a great story about how they came to be planted there.

I'd love a chance to add this book to my library's collection. genkiallison at gmail dot com

It is fantastic that we are now going to send cherry trees to Japan. It is obvious this decision was made before the Tsunami but what a wonderful way for us to help rebuild their beautiful country. This would be a wonderful addition to our school library.
diana.riederer@gmail.com