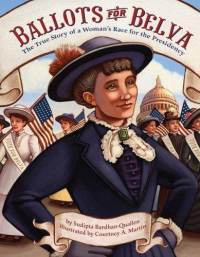 Hilary Rodham Clinton, of course, was not the first woman to run for president.  But did you know that way back in 1884, years before women won the right to vote, a daring woman ran for president, and even received thousands of votes?


Ballots for Belva:  The True Story of a Woman's Race for the Presidency, by Sudipta Bardhan-Quallen, illustrated by Courtney A. Martin (Abrams, 2008), tells this remarkable story in an easy-to-follow picture book format, which can be enjoyed by all ages.

After working as a teacher and starting a suffrage group, Belva Lockwood decided she wanted to be a lawyer at age 39.  But no law school would admit a woman in those days, except the newly formed National University law school.  Belva enrolled there with fourteen other women, but was one of only two who finished the courses, since the women were made to feel uncomfortable by the male students.  But when she finished, the school refused to give her a diploma, and she had to petition President Ulysses S. Grant, who was also president of the law school, in order to receive it.

Belva was a woman who accomplished many "firsts."  She was the first woman to practice law in federal court and the first woman to argue a case before the U.S. Supreme Court.  She was an activist for women's rights who tried unsuccessfully to get the Republican Party to put women's suffrage on its official platform. In frustration at being ignored, she realized that there was no legal basis preventing women from running from office, even though they couldn't vote.  And in 1884, she was nominated by the Equal Rights Party of the United States.  She selected another woman, Marietta Stow, as her running mate, and began campaigning across the country, working hard to raise money and organize supporters.

Although she was ridiculed by the press and even by many of her fellow suffragettes, Belva persisted.  And indeed, she won 4,711 votes, cast in nine different states, despite the fact that some vote counters threw away ballots with her name on them, not believing anyone would vote for a woman.   This made her the first woman to run for president who actually got people to vote for her--and men, since they were the only ones voting at the time.  [An earlier female presidential candidate, Victoria Woodhull, ran in 1872, but had to drop out before the election due to lack of funds.]

Belva was certainly ahead of her time, believing that some day a woman would occupy the White House as president and proving that women had the determination and courage to campaign for the position.

The book includes an author's note, glossary of terms, a useful timeline of women's suffrage in the United States, and a selected bibliography.

Bardhan-Quallen offers us an inspiring story of a true pioneer in women's rights, one that would be a terrific story to share with young girls today.  The book is handsomely illustrated as well, with attractive two-page spreads that give a monumental quality to Belva's story.

For another book on Belva for young people, see:

Belva Lockwood:  Equal Rights Pioneer, by Jill Norgren (Twenty-First Century Books, 2008), a biography for grades 5-9 that covers many more interesting episodes in Belva's life, including her work on behalf of Native Americans and the International Peace Movement.

And today on Kidlit Celebrates Women's History Month, don't forget to read a fascinating post from author Ann Bausum about the anniversary of the Grand Picket for Voting Rights!
Posted by Fourth Musketeer at 5:00 AM

Sorry about the removal...I need to proofread better! Thanks for the information about Belva! I really like your blog because I learn new things each time I read a post!