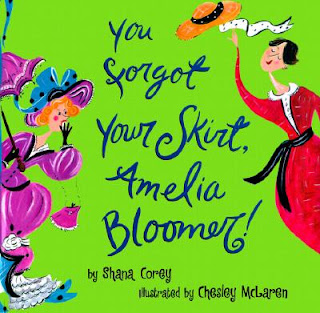 My series of outstanding picture books on women's suffrage concludes with the delightful title,
You Forgot Your Skirt, Amelia Bloomer!:  A Very Improper Story, by Shana Corey, illustrated by Chesley McLaren (Scholastic, 2000).
The book grabs  us from the beginning with its opening line:  "Amelia Bloomer was NOT a proper lady," a two-page spread where we see Amelia tossing away a frilly purple dress, gloves and other accessories, because she thought proper ladies were silly.  We see her demonstrating for a woman's right to vote, starting her own newspaper, The Lily, which was all about women's interests.  But what Amelia particularly thought was silly were the ridiculous dresses women wore, which weighed as much as a dozen bricks, swept up mud and trash from the street, and were so wide they got stuck in doorways.  Even little girls had to wear dresses and couldn't run and play.
It was Amelia's friend Elizabeth Cady Stanton's cousin, Libby, who first introduced Amelia to the idea of a new style, pantaloons that were worn under a shorter, lighter, and narrower dress.  Amelia made herself a matching outfit, and when she went out for a walk, the public was shocked!  But Amelia thought her new clothes were wonderful, and when she wrote about them in The Lily, women everywhere wanted patterns to make the new style themselves.  Soon the new style was known as Bloomers, after Amelia herself.
The book includes an author's note with detailed biographical information about Amelia Bloomer, whose life changed forever when Elizabeth Cady Stanton moved to Amelia's town, Seneca Falls, New York, making Seneca Falls the center of the women's movement.  In the author's note, we learn that women's clothing at the time typically weighed between 20 and 40 pounds!  We also learn about the considerable resistance to bloomers; Amelia and other reformers eventually stopped wearing bloomers because they didn't want the women's movement "reduced to a battle over clothing."
As Corey notes in her conclusion, "Today women and girls can wear whatever they want.  Perhaps it wouldn't be that way, though, if all those years ago Amelia Bloomer hadn't had the courage to be "improper" and to take a stand for something she believed in."
I can't discuss this book without drawing attention to the charming French-style very chic illustrations by multi-talented fashion designer/artist/children's book illustrator Chesley McClaren.  Painted in vibrant colors in gouache, the illustrations seem to jump and dance across the pages, capturing the freedom that Amelia and her friends must have felt in their new, less restrictive outfits.
This is a terrific tale to share with young girls today, who take for granted their freedom to wear whatever they please--whether it means dressing like a princess or being comfortable in shorts and a t-shirt.  It was not so long ago that girls weren't allowed to wear pants to school, after all.  Amelia Bloomer would be proud to see that women and girls can be as comfortable (or not comfortable, in 4 inch heels!) as they choose today.
And on Kidlit Celebrates Women's History Month today, reflections on women's history ("So Many Women, So Little Time!)  from award-winning children's author Tanya Lee Stone!  Don't forget to check it out!
Posted by Fourth Musketeer at 5:00 AM