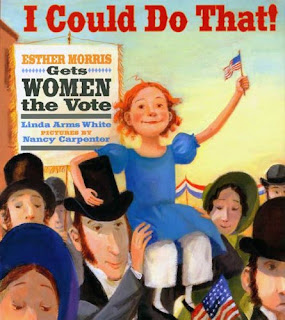 Today's Women's History Month book focuses on the story of Esther Morris, the first woman to hold public office in the United States.

I Could Do That:  Esther Morris Gets Women the Vote, by Linda Arms White, illustrated by Nancy Carpenter.  Melanie Kroupa Books, 2005.

This delightful picture book tells the story of a pioneer for women's rights, Esther Morris, whose story was completely new to me.  We first meet Esther as a determined six-year old, who meets each new challenge by piping up with the refrain, "I could do that," whether it's making tea, sewing, taking care of her younger brothers and sisters when her mother dies, or opening her own hat shop at a time when it was unusual for young women to own their own business.

When her first husband dies, she can't claim his land in Illinois because women weren't allowed to inherit from their husband.  She later remarries and moves to the Wyoming Territory, where women were scarce, outnumbered six to one by men!  She opens another hat shop, but also helps deliver babies, nurse the sick, and do whatever else needed doing on the frontier.  When the territory holds its first elections, she gets a commitment from the male candidates to introduce a bill giving women the vote in Wyoming, and didn't let them forget their promise.  In 1869, Wyoming women indeed got the right to vote, before any other state or territory in the country.  When the county's judge resigns in protest, Esther takes over his job as justice of the piece, the first woman in the country to hold public office.  White's version of Esther's extraordinary story ends triumphantly with Esther casting her first vote in an election.  Like the Smith sisters whom I wrote about yesterday, Esther did not live long enough to be able to vote in a presidential election.

Esther's story is greatly enhanced by the wit and humor of the brightly colored folksy illustrations by Nancy Carpenter, who has illustrated numerous historical titles.  I particularly liked her use of a vibrant yellow as the background color for many of the two-page Wyoming spreads, which seemed to suggest the bright light, heat, and dust of the Wild West territory.  She also exploits Esther's great height (she was six feet tall, a giant among women--and men-- in that age) to great effect in many of the illustrations, as Esther towers over the men for whom she pours tea while they discuss the upcoming election.

An author's note with further information on Esther Morris and a list of resources, both print and web sites, to explore Esther Morris' story further.

And don't forget to check out Kidlit Celebrates Women's History Month:  today a fascinating post from Chasing Ray about Dolly Shepherd, an early 20th century balloonist!
Posted by Fourth Musketeer at 5:00 AM

Thanks for this post. I think I LOVE this book. I always used Emily Arnold McCully's book, The Ballot Box Battle to teach my girls about women's suffrage and while she's an excellent author, my girls always thought the book was boring.

I'm glad to have another excellent choice. I will try to get my hands on this book. Any chance you will be doing a giveaway?

No giveaway, I'm afraid--I got this one from the library. But it should be easy to find at the library (it's also on sale incredibly cheap from Amazon as a "bargain book"! Worth adding to your own library, I think).