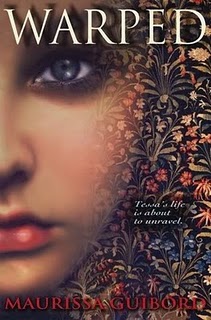 The story centers on Tessa, a "normal" teenage girl who discovers there's something weird about an old unicorn tapestry her bookseller father bought at an auction, mixed up in a box of old books.  The unicorn looks fierce, not like the cuddly rainbow ones of her girlhood, and when she's near it, she begins to have strange dreams of a hunt in a long-ago forest in a distant land.  But when she accidentally pulls a thread on the tapestry, a handsome young man appears--William de Chaucy--who's been under the enchantment of an evil witch for more than five centuries.  Their destinies are somehow linked together--and mixed up with the Fates, the three sisters who control the life threads of all humans.  Tessa must somehow return some missing threads--but can she do it and keep the irresistible William alive in the 21st century?

Teens who enjoy historical fantasy are likely to devour this juicy and fun read, which will answer many important questions, such as the following:  do charmingly arrogant 15th century noblemen like pizza?  You'll have to read this to get the answer, and to discover the many twists and turns in the book's plot.

Disclosure:   Review copy provided by publisher
Posted by Fourth Musketeer at 5:00 AM

Haven't heard of this one!
Loved the review!