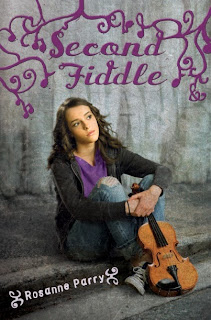 
In her second novel for young people, Rosanne Parry takes us back to Berlin in 1990, at the time of the fall of the Berlin Wall and the end of communism in Eastern Europe.  The novel has a terrific opening line:

"If we had known it would eventually involve the KGB, the French National Police, and the Supreme Allied Commander in Europe, we would have left that body in the river and called the Polizei like an normal German citizen..."

Our narrator, Jody, is a army kid, used to moving constantly and not forming bonds that are too tight.  But she's made two really good friends in Berlin at the American school--Giselle and Vivian--and the three take music lessons together.  As the novel opens, Jody will soon be moving back to the States since her father is retiring from the army.  In the meantime, she and her friends are preparing for a chamber music ensemble contest in Paris when their teacher falls ill and tells them he can't be their chaperone on the trip from Berlin to France.  On their way home from the lesson, the girls witness a terrible crime in East Berlin, and save a Soviet soldier from drowning in the river.  When they get the idea to have him impersonate their music teacher--providing them with a chaperone and getting the young Estonian away from the Russian army in one fell swoop--they can't foresee what the consequences will be, nor who exactly the young Estonian might be.  Is he friend or foe?  Are the Russians following them on the train to Paris, looking for the Russian sergeant?

The three girls have the adventure of a lifetime in Paris, with lots of local color thrown in, including a stay at Shakespeare and Co., the famous English-language bookstore in Paris.  This is an engaging story of friendship, music, and freedom set in what's a long-ago era for today's tweens--the end of the Cold War.  A time before kids were constantly checking in via texting and phone with their parents--positively the Middle Ages for today's kids!

Second Fiddle was recently picked as a Spring 2011 Kids Indie Next list, from the independent booksellers association.

Disclosure: Review copy provided by publisher.
Posted by Fourth Musketeer at 5:00 AM