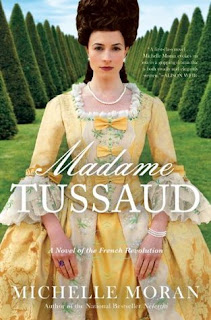 
Everyone's heard of the famous Madame Tussaud's wax museums, which started in London but now have locations around the world, but how many of us know the thrilling story of the real Madame Tussaud? This novel, which was published for adults but would make an excellent choice for teen readers as well, concentrates on the life of young Marie Grosholtz in Paris and Versailles during the turbulent years of the French Revolution.

Marie lives with her mother and uncle, studying under her uncle's tutelage how to make figures for their famous Salon de Cire, or wax museum, which includes tableaux with statues of everyone from the King and Queen having a meal to the Cavern of Great Thieves, made to look like a dungeon.  Her uncle hosts one of the city's most popular salons, whose regulars include the Duc d'Orleans, the king's radical cousin, Jean-Paul Marat, Robespierre, and others who are soon to become famous--or infamous--as revolutionaries.  Her brothers guard the king as part of the Swiss Guard at Versailles.

When the novel opens, a letter has just come from the King and Queen, saying they want to visit the Salon!  Although Marie knows that the Queen has recently been plagued by scandals, she is convinced that their visit will bring good fortune.  What she can't imagine at that moment is that she will be invited to move to Versailles to instruct the king's sister, Madame Elisabeth, in the art of wax modeling, and that her life will become intimately linked with that of the royal family.  Never could she have guessed that within a few brief years, she would be required by the revolutionaries to make wax reproductions of the bloody heads of their victims, some of whom she knows personally, to be paraded through the streets of Paris.  If she doesn't do their bidding, her head is likely to be the next to fall under the guillotine's sharp knife...will she be able to survive the Revolution with her own head intact?

This novel is historical fiction at its best--a fascinating tale filled with real historical characters, told by a skilled storyteller.  Moran weaves a tantalizing tale that takes us from the richness and splendor of Versailles (complete with the stench of the hallways) to the heights of the Terror.  Although I have read many novels set during this period, as well as nonfiction about the French Revolution, I couldn't help but gasp at some of the horrors Marie was forced to endure.  There's some romance, too, of course, for Marie, but it's secondary to the political tale.

Highly recommended for teens and adults!

Library Journal published an interview with the author, Michelle Moran, whose previous novels all were set in ancient Egypt.

A film on Madame Tussaud's life has recently been announced, to be produced by Stephane Sperry and Liaison films.  I'm looking forward to that one!
Posted by Fourth Musketeer at 5:00 AM

I've been intrigued by this book ever since it made it into a Goodreads newsletter a few months back. I know very little about this time period, and I'm glad to see that it's gotten your seal of approval! There's nothing worse than thinking you know a bit about a time period, only to realize that all your facts are from badly researched historical fiction.