Today marks the 150th anniversary of the start of the Civil War--specifically the firing on Fort Sumter by Confederate forces.  Most people expected the war to end quickly, but they couldn't have been more wrong.  The war dragged on for four long and bloody years, and at its conclusion, more than 620,000 had died, more than the casualties in all other American wars combined.  Commemorations of the conflict are taking place all over the country (see the National Parks Service site for further details as well as the website of the Civil War Trust).

More than a thousand books, both fiction and non-fiction, have been written specifically for young people about the Civil War (and more than 70,000 books on the topic have been published overall since the war's end!).  In this post I will highlight ten excellent historical fiction novels about the conflict published in the last decade, listed in no particular order.  Next month I will highlight outstanding non-fiction titles for young people about the war as well as picture books about the Civil War.  Watch for those posts!

1.  Two Girls of Gettysburg, by Lisa Klein (Bloomsbury, 2008):  When the Civil War breaks out, two cousins find themselves on opposite sides of the conflict, until they are reunited in the town of Gettysburg. 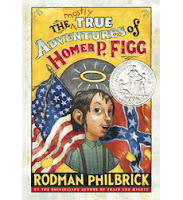 2.  The Mostly True Adventures of Homer P. Figg, by Rodman Philbrick (Blue Sky Press, 2009).  Young Homer Figg follows his underage brother into the thick of the Civil War, hoping to find him and save him, but winding up instead in the thick of the Maine regiment which saved Little Round Top at the Battle of Gettysburg.  Funny and tragic at the same time.

3.  The River Between Us, by Richard Peck (Dial, 2003).  During the early days of the Civil War, the Pruitt family takes in two mysterious young ladies who have fled New Orleans to come north to Illinois.

4.  The Storm Before Atlanta, by Karen Schwabach (Random House, 2010).  A thought-provoking novel about three young people whose lives become intertwined--a Union drummer boy who dreams of dying gloriously for his country, a young Confederate soldier who he befriends, and an escaped slave who finds work in the Union camp for a surgeon.

5.  Stonewall Hinkleman and the Battle of Bull Run, by Sam Riddleburger and Michael Hemphill (Dial, 2009).  A time travel novel about Stonewall Hinkleman, a boy whose parents are so Civil-War obsessed that they named him after Stonewall you-know-who, and who hates participating in Civil War re-enactments every weekend with his parents, where he can't play his Game boy but has to play the bugle instead.  But when Stonewall finds himself back in the actual Battle of Bull Run, he has to use his knowledge of history to stop a bad guy who has also travelled back in time from changing the whole course of American history.  Very funny but with some serious historical content.

6.  Come Juneteenth, by Ann Rinaldi (Harcourt, 2007).  Ann Rinaldi has written many excellent novels about young girls during the Civil War; this one tells the story of a young slave in Texas--where slave owners managed to keep the news of the Emancipation Declaration from their slaves for nearly two years.

7.  Hearts of Stone, by Kathleen Ernst (Dutton, 2006).  Orphaned when her father dies fighting for the Union and her mothers dies from exhaustion, 15-year old Hannah must find a way for her family to survive during the Civil War in Tennessee.

8.  My Last Skirt:  The Story of Jenny Hodgers, Union Soldier (Clarion, 2006).  Enjoying the freedom she has while dressing like a boy in order to earn higher pay after leaving Ireland, Jennie serves in the 95th Illinois as Private Albert Cashier, a Union soldier.  Based on a true story.

9.  Picture the Dead, by Adele Griffin and Lisa Brown (Sourcebooks Fire, 2010).  A genre-busting blend of historical fiction, graphic novel, ghost story and mystery, about an orphan girl whose fiance is killed in the war.  When she joins up with a spirit photographer, she begins to uncover mysterious secrets about the man she thought she loved.

10. Gabriel's Horses (first in a trilogy) by Alison Hart (Peachtree Press, 2008).  In Kentucky, the 12-year old slave Gabriel contends with a cruel new horse trainer and skirmishes with Confederate soldiers as he pursues his dream of becoming a jockey.