Note:  I am delighted to welcome debut novelist Carole Estby Dagg to The Fourth Musketeer!  She has written a fascinating post about her research into her own family's history, which inspired her new novel The Year We Were Famous, reviewed yesterday here at The Fourth Musketeer. Carole's novel won the Society of Children's Book Writers and Illustrators' Sue Alexander award for most promising new manuscript.

I grew up with whispers about Great-grandmother Helga and her daughter, my Great-aunt Clara.  What they’d done wasn’t widely talked about because it had been considered a scandal back in 1896: they’d left the rest of the family, including Clara’s seven younger brothers and sisters, back  home in Mica Creek, Washington to walk clear across the country to New York City on a $10,000 wager  that would save the family’s farm.   What’s more they’d covered half the country, from Salt Lake City on, wearing skirts that were a shocking six inches above the ground.   Even worse yet, Helga Estby was one of those suffragists who wanted to prove that women were the equal of any man and deserved the vote.
I didn’t discover details about the walk until I was grown, when two articles from Minneapolis newspapers which had been salvaged from a burn barrel started circulating among family members.  When I found out that Clara and her mother  had walked for 232 days, from 25-50 miles a day, surviving flash flood, blizzards, assailants, days without food or water and meeting the whole range of 1890’s society from bands of Indians to president-elect McKinley, I knew this was a story that had to be told.  When I heard that the journals which Clara and Helga had intended to turn  into a book had been destroyed, I vowed that someday I would tell  their story for them.
By writing to librarians across the country and scrolling through microfilmed newspaper collections at the University of Washington, I collected a dozen newspaper articles about the walk.  The articles weren’t as helpful as I’d hoped, though.  They often contradicted each other in details, and descriptions of their adventures were tantalizingly brief.  Being lost for three days in the Snake River Lava fields for three days, showing a band of Ute Indians how to use a curling iron, or shooting an assailant just rated one sentence in a news account.
If  I wanted to tell  readers what it would have been like to walk those 232 days, I’d have to expand those one-liners into fully developed scenes, and the non-fiction book I had intended to write would have to become historical fiction. I expanded research from the walk itself to circumstances related to the walk: William McKinley and William Jennings Bryan, who were running for president that year; rattlesnakes and early days of railroading; eating habits of cougars; and frontier treatments for blisters.
Now that I was writing fiction,  I needed  to write in the voice of a late Victorian young woman.  To do that, I gave up reading all contemporary books for a year and read only books Clara might have read--from classics for school to the dime novels that were passed from hand to hand among young people of the day.  Incidentally, the vampire craze is not new.  Bram Stoker’s Dracula wouldn’t be out for another year, in 1897, but Thomas Preskett Prest’s  Varney, the Vampire,or Feast of Blood, had been out since before the Civil War.
Besides reading books, I pored over old maps to reconstruct a plausible day-by-day route for them.  I went on eBay to bid on period postcards of places they passed through, which inspired details for several chapters. I drove part of the route with my daughter, and stopped at a little museum in Rawlins, Wyoming where I bought a pamphlet about a Victorian-era local woman doctor who became  Clara’s ‘someone to talk to.'  Approaching the Internet like a treasure hunt, I hopped  from clue to clue to research relevant trivia like the history of Underwood typewriters, the elevation of the pass in the Blue Mountains, and the name of the Indian Agent at the Umatilla reservation.  How far did research take me?  Right down to finding Folkwear patterns and sewing a Gibson Girl blouse and the Victorian version of under drawers.
There’s a danger in being a research person.  I can spend half a day researching the mechanics of the style of snow plow that might have been used in the Blue Mountains in 1896—and then have to cut the scene six months later to balance the high points in the narrative.  Ninety-nine per-cent of my research never makes it to the book in a way that is obvious to the reader, but it helps draw me into that other world.  Besides, it’s fun!
Clara and her mother had their picture taken in Spokane before they left home and had it made into cartes de visite which they gave out as souvenirs to people who took them in for the night.  They also sold copies when they modeled New American Woman clothing and gave lectures on their walk along the way.
The reporter in the New York World wrote that Helga Estby and her daughter “intend to write up their adventures afterwards if they survive the experiment.”
Major Moorehouse, the Indian agent for the Umatilla reservation back in 1896, took hundreds of photographs, many of which were made into postcards.  I was the successful bidder on eBay for this popular postcard and couldn’t resist writing it into the book.
This article appeared in the New York World when Clara and Helga reached New York.  They must have been appalled to have themselves depicted as armed desperados instead of women desperate to save their farm. 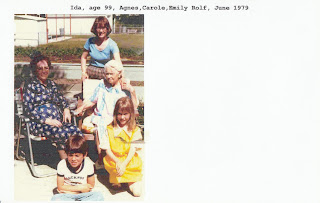 This photo from 1979 shows three generations of Estbys:  I’m standing in the back; Great-aunt Ida Estby, Clara’s sister, is seated on the right; Agnes Krause Estby Funk,  Clara’s sister-in-law, is seated on the left;  my children Rolf and Emily are seated in the front.   The missing links are Clara’s brother Arthur (my grandfather), who died in 1924, and my father, who died in 1972.

Read more about Carole at the Class of 2K11's website and at her own website, Caroleestbydagg.com.
She will be at BookExpo America in New York at the end of May, so if you're attending, be sure to look out for her!
Posted by Fourth Musketeer at 12:43 PM

This is a fascinating post! I just received the copy of this book that I ordered for my library, and couldn't resist reading a bit of it before I sent it along to the processing department. It really drew me in- I love the narrator's voice, and the story sounds fascinating! I am putting it on my to-read list for sure.

Such amazing women! And their sense of adventure seems to have been handed down. Great research, Carole. I really feel sad that the journals were destroyed.

Fascinating story I just read Bold Spirit by Linda Hunt. So many unanswered questions. What was it like for Ida to be stuck in the shed and for how long did the siblings have to stay there? Were they mad at their mother Helga for leaving? Did they blame her for the siblings deaths and their struggles not having a mother for so long? How could a mother leave so many young children including a 2 year old? Didn't she miss her children more than a political cause? What caused Helga to be so disengaged as to allow herself to leave such small children for so long? Tradgedy that her writings were burned. Sounds like Ida had a story of her own to write, from her side. Did she answer the questions Helgas adventures posed?