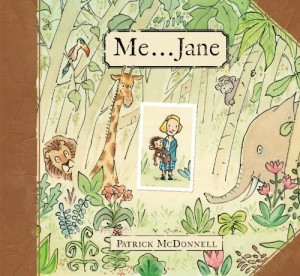 I don't usually think of biographies, even picture book biographies, as good choices for the youngest children, but author/illustrator Patrick McDonnell, who has numerous picture books and the nationally syndicated Mutts comic strip to his credit, has changed my mind.  His just-published picture book about Jane Goodall, the internationally renowned chimpanzee researcher and crusader for wildlife conservation, would make a great read-aloud for preschoolers as well as early elementary school students, and in fact, its simple, inspirational story and charming illustrations can be enjoyed by all ages.

McDonnell's whimsical, childlike watercolor and ink illustrations are the star of this little book, which has very minimal text.  We meet the child Jane with her prized stuffed chimpanzee, Jubilee, who accompanies her on all her adventures. Jane loved to be outside from an early age, taking great joy in observing nature and even writing about it in her notebooks (a page from which, complete with misspellings, is reproduced in this volume).  "It was a magical world full of joy and wonder, and Jane felt very much a part of it."  Jane sits high up in her favorite tree, reading the adventures of Tarzan and another girl named Jane in far-off Africa, and dreams of a life in Africa helping animals.  At the end of this book, we see a grown-up Jane, waking up in a tent, befriending a real chimpanzee who looks much like Jubilee.

I loved everything about this book, including the nostalgic design, with the eggshell colored paper, old-fashioned type face, subtly colored illustrations which somehow give the book an old-fashioned tinge, and the use of ornamental engravings from the 19th and early 20th century, which appear to have been subtly stamped on the pages.  McDonnell's simple illustrations somehow mesh brilliantly with the more elaborate Victorian engravings, and the whole book comes together flawlessly.  A brief endnote gives further biographical information on Jane Goodall, along with a photograph of a baby Jane with her beloved toy chimp, and a message from Jane Goodall with information about her environmental advocacy program for young people,  Roots and Shoots.

There are a number of other picture book biographies about Jane Goodall, including another new one published this month, which I have not yet seen:  The Watcher: Jane Goodall's Life with the Chimps, by Jeanette Winter (Schwartz & Wade, 2011).  Mike Venezia, author and illustrator of the very popular Getting to Know the World's Greatest Inventors and Scientists series, recently published as part of that series the volume Jane Goodall: Researcher Who Champions Chimps (Children's Press, 2010).  Jane Goodall herself has written a number of books for young readers; especially appropriate for the youngest wildlife lovers is The Chimpanzee Family Book, lovingly photographed by Michael Neugebauer (North South Books, 1997), which follows five-month old Galahad and his chimpanzee family.

Some other blog reviews:

Sounds like a great book. And I didn't know the author/illustrator is the cartoonist of Mutts. I love that strip.

This book sounds like a treasure! I love McDonnell's artwork- it's always so endearing. I'll keep an eye out for this one!