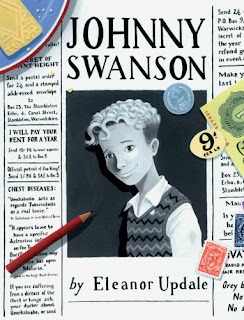 
Eleanor Updale, the award-winning author of the popular Montmerancy series, takes us to England in 1929 in her newest historical mystery novel for young people.  Our hero, Johnny Swanson, is an engaging young boy who finds himself mixed up in a murder mystery--and his own mother is the suspected murderer!  Johnny's sure as can be that she's not guilty, but no one will believe him and the police seem to have already made up their mind.  Can Johnny save her before it's too late?

There seem to be three interrelated stories going on in this novel--the above-mentioned murder mystery, the tuberculosis epidemic in England, and Johnny's many schemes to make money to help out his mother.  Johnny is enticed by a newspaper advertisement promising the "secret of instant height," just what he needs to stop the bullying at school because of his small stature.  When he discovers the ad is a hoax, he decides he can play that game also, and soon is concocting schemes to put advertisements in various publications and collecting small sums of money for bogus answers to problems.  As you might imagine, Johnny becomes hopelessly entangled in a comical web of lies around his business, this part of the story very much reminded me of the classic Great Brain series by John D. Fitzgerald that I enjoyed as a child.

At the same time, a TB outbreak is plaguing England, and Johnny's neighbor, Dr. Langford, just might be working on a secret vaccine for the disease.  This work turns out to be dangerous, indeed--for Dr. Langford and maybe for Johnny too, as he learns more than he should know about the undercover work.

Johnny makes an appealing boy detective--a character who's far from perfect, but whose good intentions shine through as he works to help his mother, first through his financial schemes, and then to save her from the hangman's noose.  The author combines humor and suspense--a winning combination for young mystery fans.  Perhaps we will see more adventures of Johnny Swanson in the future!

Disclosure:  ARC received from publisher.
Posted by Fourth Musketeer at 5:00 AM