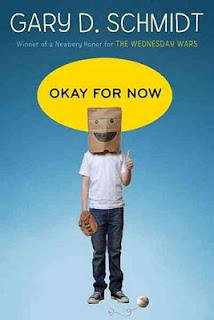 
In a companion to his acclaimed novel, The Wednesday Wars, award-winning writer Gary D. Schmidt revisits the Vietnam era in Okay for Now.  Doug Swietech, a secondary character in the Wednesday Wars, becomes the focus of this story; it's close to the end of the summer, and Doug and his very dysfunctional family have just moved to a "dump" of a town in upstate New York when the book opens.  Doug idolizes Joe Pepitone of the Yankees, and his most treasured possession is a jacket signed given by his idol.  His home life is dominated by his abusive father and his bullying older brother, while another brother is off fighting in Vietnam.

The library and the town's kind librarian, Mr. Powell, play a key role in the story, as Doug discovers that although "maybe stupid Marysville was a dump,...this place wasn't."  At the second floor of the library, he finds a special room, with a huge book--a book displayed under glass, with only one picture showing.  It's a gigantic picture of a bird, and Doug can't take his eyes off it.  "It was the most terrifying picture I had ever seen.  The most beautiful."  It's an original Audubon, and it haunts Doug's imagination.  Although Doug doesn't draw (since, as he quips in the book, only girls with pink bicycle chains draw), the kind librarian is soon leaving drawing supplies near the Audubon display that Doug is drawn to by some powerful magnetic force.  When he finally picks up a pencil to copy Audubon's drawing, it felt "spectacular, " and Mr. Powell is soon giving him drawing lessons (was that in Mr. Powell's librarian job description?)

As much as Doug hates "stupid Marysville", he is quickly befriended not only by Mr. Powell, but also by Lil, a girl whose family owns the town's deli, and gets Doug a job delivering groceries on Saturdays for some of the more eccentric citizens of Marysville.  Things aren't going too bad for Doug, until his older brother is suspected of some local robberies, his father's physical abuse is revealed to all his classmates, his brother comes back from Vietnam maimed physically and emotionally, and to top it off, pages of the precious Audubon manuscript are being sold off to pay the town's bills.  Can Doug stop the cycle of abuse in his family and perhaps even put the town's Audubon book back together?

Schmidt is a masterful writer, managing to incorporate pathos, humor, loss, the power of art, friendship and more into this memorable novel.  Doug's voice and his journey is one that the reader will not soon forget.  The novel is pulled together by the Audubon prints, which serve as titles for each chapter and are pictured in the novel as well, and often seem to mirror what is happening in Doug's own life.  As Doug comes up with ways to reconstruct the precious book, he is also making sense of his own life and future.

Okay for Now is already getting some pre-Newbery buzz, and perhaps Schmidt will be adding a Newbery to his two Newbery honor awards (for The Wednesday Wars and Lizzie Bright and the Buckminster Boy.  Schmidt, who is a professor of English at Calvin College with six children of his own, is working on the third volume of The Wednesday Wars trilogy.  That's a book that will definitely be on my "to read" pile.

Note:  A live webcast of Gary Schmidt from the New York Public Library will take place on May 9, 2011.  See Fuse #8's announcement of the event for further details.
Posted by Fourth Musketeer at 5:00 AM

I really loved The Wednesday Wars. And Gary Schmidt was just at the Children's Book Festival in Hattiesburg, MS. I missed his speech but heard some highlights from other attendees. Thanks for your review!

I didn't realize that this was a companion book featuring Doug! I enjoyed Wednesday Wars, and so I have my eye on this one. Thanks for your review!!!

Absolutely LOVED The Wednesday Wars...am waiting for this at the library!

This is one that seems very popular with adults, but I don't know that students are going to be quite as fond of it. It is rather slow moving.

Hi darling!
You have a nice page =)
I like this!
I love to know Bookaholics all the word...
I have a blog too...Many books...Many movies and musics...
I write too and go have my own book coming soom.