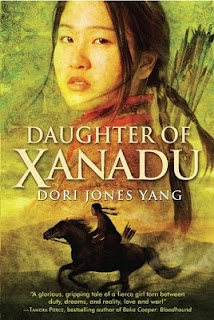 Looking for a book for teens who crave adventure, romance, strong heroines, an exotic setting, and plenty of action?  Look no further than Daughter of Xanadu, a 2011 release from author Dori Jones Yang.

East meets West in this tale of the fictional Princess Emmajin, an athletic, strong, and of course, beautiful young woman who keeps up with her male cousins in all kinds of athletic pursuits.  She dreams of joining the army of her grandfather, the Great Khubilai Khan, and pursuing glory on the battlefield for the Mongol Empire, then at the peak of its power.  She does not wish for a conventional pampered life of court gossip, marriage, and children like the other young Mongol women who surround her.

But Emmajin does not expect to meet the charming, handsome young merchant Marco Polo, who has come from the faraway city of Venezia, in a land known as Christendom not yet ruled by the Great Khan.  They meet in Xanadu, the Khan's summer palace, with its lush and magical gardens described in Marco Polo's writings and inspiring the famous Coleridge poem.  The Great Khan himself has asked Emmajin to get to know the foreigner, with the goal of gathering intelligence on their distant country.  But as she gets to know the young Marco, she finds herself more and more attracted to his foreign ways, from his clear light eyes, to his strange red beard, to his lilting accent when speaking the Mongol tongue, to his gift for storytelling.  As her heart's desire of galloping off with the army seems more and more possible, she is torn between her loyalty to Khan and country and her attraction to Marco.


What an impossible situation!  I had always been loyal to my Khan and my people, but now that loyalty required me to make an enemy of a man who was gradually becoming my friend.

When fate makes them traveling partners as they travel across China together, Emmajin with a military unit and Marco on a secret mission for the Khan, they grow even closer as they share many adventures together.  But Emmajin knows Marco is not a suitable match as a husband for a Mongol princess--how will she handle this forbidden attraction, when his casual touch makes her tingle with desire?

Without divulging the ending, let me just comment that while the conclusion will probably please teen readers, it does not seem totally in keeping with the Mongol culture described in the novel.  Nonetheless, I greatly enjoyed this swashbuckling tale of medieval China.  Emmajin is a passionate, strong heroine facing difficult life choices as she is torn between her own ambition, what society and her family expect of her, and her forbidden attraction to a foreigner.  Marco Polo himself has great appeal as a foil to the valiant Emmajin.  The book is carefully researched, and full of fascinating vignettes of the exotic Mongol culture and how, at this time period, it was changing and absorbing more Chinese elements, ranging from palace architecture to the drinking of tea.  Also noteworthy is the contrast between Mongol and Christian culture of the time, and the Khan's interest in hosting foreigners from all over the world.

Some readers may think the author was inspired to write this tale by the legend of Mulan, the Chinese woman who dressed like a man to take her elderly father's place in the army, she was in fact by the story of Ai-Jaruk or Khutulun, an actual niece of Khubilai Khan who accompanied the army on military campaign.  Her story was told by Marco Polo in his memoirs.

If you are interested in winning a copy of this exciting new novel, please leave a comment below with your e-mail address so that I can contact you if you are the winner, which will be chosen through a random number generator on Sunday, January 23.

And watch for a guest post from author Dori Jones Yang tomorrow, telling us more about the fascinating research she did to write this historical novel.

Below is a book trailer with footage from the author's research trips to China.

So excited for this one. It's a totally unique setting and sounds like fun!

Wonderful review Margot! I'm glad to see you enjoyed it. The description of the top of your review describes what I'm looking for exactly.
Thank you for your comment on Dori Yang's guest post- I'm sure I will love the book! I'm looking forward to reading the guest post tomorrow.

You didn't mention if the contest was international but if it is please enter me : stephanie.readsAThotmailDOTcoDOTuk

This book looks great...can't wait to read it!

Thanks so much for having a contest, I've been meaning to get a copy of this...can't wait to read it!

I would love to win this one!

I am charlotteslibrary at gmail dot com

Please put my name in the pot for this one. Sounds fascinating, and have teenage girls to pass it on to once I finish!

This is definitely a book I would be interested in. It sounds like the kind of historical novel that appeals to me. You know, my daughter is in China and wants to go traveling around when she is finished teaching. Over the years, I have developed a real appreaication for things Asian, which is not an area I knew much about before - even a few Chinese phrases.
Great review and interview.

This is the second time I did this - forgot something in a comment. This time is is my email which is thechildrenswar@gmail.com

I'd love to win this! pragmaticmom.com@gmail.com

This one looks and sounds very intriguing! I'd love to read it.
librariansbook(at)gmail

I am very interested in this book. My husband has round eyes and it has been passed down
through the family that maybe some of Marco Polo's enterage mixed with some of people along the route. Would love to learn more about this area and time in history.

So excited for this book, I can't wait to read it. :) Thanks for the giveaway opportunity.

Thanks for the giveaway! Please count me in!

Please enter me to win. I have definitely heard about this book and would find it interesting to read.
ruthaw_1974@yahoo.com