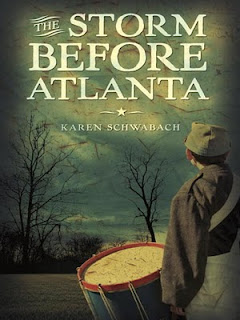 There's no shortage of historical fiction novels for children about the Civil War, but with the 150th anniversary of the outbreak of the conflict this year, this thought-provoking new novel by Karen Schwabach is a worthy addition to any school or public library's collection.   The novel tells the story of ten year old Jeremy, who wants nothing more than to enlist in one of the New York regiments of the Union Army as a drummer boy and gloriously die for his country.  Continually told he's too young to enlist, he goes off to find the war himself--to follow the army until they take him. Soon he joins up with the 107th New York Regiment from Elmira, takes his oath, and gets a uniform, a pair of shoes, the promise of $13 a month, and best of all, a glorious drum.  Traveling to Georgia, Jeremy and the 107th become part of a new corp led by General Hooker, on the march.  "They were not told where they were going or why.  It wasn't a soldier's business to know that."  But Jeremy can't wait to "see the elephant," as the soldiers called those who had seen action, but all they seem to do is march and wait.

We're also introduced to to two other key characters, whose lives will become intertwined with Jeremy's:  Dulcie, a spunky and very bright slave girl who runs away from her cruel mistress to find the Union Army, and eventually becomes a medic for a Union field doctor, and a friendly young Confederate soldier, Charlie Jackson, just a bit older than Jeremy, who's looking to trade for coffee or anything else.

War isn't as black and white as Jeremy had imagined back home.  Jeremy knows that Charlie shouldn't really be his friend, but he's hungry for company his own age.  And Charlie, on the Confederate side, wonders why he's fighting a war started by a bunch of rich men who "Told us we had to stand by the South.  Then they went home to their families, to watch their slaves makin' money for 'em."  And both sides learn that war is more about rain and mud and staying alive than glory and being a hero.


Schwabach creates sympathetic characters in her three young protagonists, as well as a very convincing sense of place.  The reader feels right there in the middle of the action, as 98,000 Union soldiers march into Georgia complete with hundreds of wagons, cattle to be butchered, ambulances, servants, contraband slaves, and even some dogs and a pet pig.  We experience along with Jeremy and Dulcie the chaos, blood, and horrors of the battlefield and its aftermath.  There's plenty of action, drama, and even a surprise ending (no spoilers here!) as Jeremy and his comrades in the First Division march closer to Atlanta.
The author includes a brief historical note with additional background information about the characters, many of whom were real people, and a bibliography of selected sources.  To learn more about events across the country commemorating the 150th anniversary of the Civil War, see the website of the Civil War Trust.

Other reviews:
Kirkus
Tribute Books Reviews
I'm planning to compile a list later this spring of top 10 novels for young people about the Civil War.  What's one that you've read that should definitely be on my list?  Let me know your favorites in the comment field below.

This sounds like a good book. Both my great great grandfathers enlisted in the Union Army when they were 15, so I kmow that young people could do what Jeremy did. I am going to add this book to my Civil War Challenge list.
I have Annie, Between the States by L M Elliot also listed, if you don't have that for your list, though it is a pretty common book.
Thanks for the great review.

What a great focus your blog has. So glad the comment challenge pointed you to my place and me here.

Sounds like a great book...certainly much better than the poorly-written kid's Civil War novels they had us read in middle school. You should advise the schools which historical fiction novels are entertaining and well-crafted in addition to educational!

Also, congratulations--I have deemed you a very stylish blogger! To participate, check out the link to my post for details: http://republicoflions.blogspot.com/2011/01/i-am-stylish-blogger.html