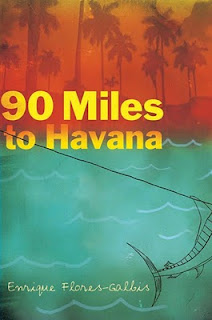 Author and artist  Enrique Flores-Galbis has written an exciting coming of age story based on his own experiences as one of the 14,000 Cuban children sent from Cuba to the U.S. without their parents in 1961 in Operation Pedro Pan, the largest exodus ever in the Western hemisphere of unaccompanied children.

The book opens with Julian, his two older brothers, their father and their family cook, Bebo, on their annual New Year's Eve fishing trip.  Julian's main concern is his embarrassment over losing the enormous fish he had hooked, since he desperately wants to impress his older brothers with his heroism.  But more serious problems will soon be facing Julian and his family.  Revolution has come to the streets of Havana, and their affluent neighborhood begins to turn into a ghost town, as families leave the country.  Soon Julian and his brothers board a plane to Miami, with the hope that their parents will soon be joining them.

But the refugee camp where they are sent is nothing like the summer camp that they expect; the overcrowded facility is ruled by a nasty bully, Caballo.  Because there are not enough adults to properly supervise the facility, the adults rely on Caballo to keep order.  But when Caballo takes Julian's prized drawing-pad, which is one of his only precious objects from home, Julian has had enough.  Dolores, the kind camp cook, suggests that Julian use the democratic way to organize a resistance movement to get back at Caballo--their own revolution against the bully dictator.  When Julian plays his last trick on Caballo, he knows he has to leave the camp--or else.

Luckily for Julian, he is taken in by Tomas, who's fixing up a boat that he intends to use to illegally transport people from Cuba.  Julian desperately wants his parents to be included, so his family can finally be reunited.  When he sails to Cuba with Tomas to pick up the refugees, he's in for the adventure of his life.  Will Julian finally become a hero?

Flores-Galbis does an excellent job in this novel of showing us the Cuban revolution from a young child's point of view.  While Julian doesn't understand everything that's going on, he has to deal in his own way with the trauma of being separated from his parents and everything he has ever known.  Julian has to grow up in ways he never expected and fight against bullies, loneliness, and loss.  This is a book that is likely to appeal equally to boys and girls, who will identify with the very sympathetically portrayed main character.

This mass exodus of children from Cuba immediately called to mind for me the Kindertransport of Jewish children to England during World War II.  However, unlike the Jewish children who were sent away to escape death at the hands of the Nazis, these children were sent away by parents who feared that their children would be taken from them by the new revolutionary governments and sent away to be "re-educated," or indoctrinated with Communist beliefs.  Many also believed that their teenage sons would be forced to become soldiers in the military, and sent them to the U.S. to escape that fate. While about half of the minors were immediately reunited with relatives or friends at the airport, the rest were placed in temporary shelters in Miami, and eventually relocated to orphanages and foster families in 30 states.

For more on the history of Operation Pedro Pan, see the website for alumni of the program.

This is the second novel for young readers to be published on this previously little-known topic this year, the other being the critically acclaimed novel The Red Umbrella by debut novelist Christina Gonzalez.

An excerpt from 90 Miles to Havana can be read here.
Posted by Fourth Musketeer at 5:00 AM

This one sounds like one I would really enjoy. I haven't heard of it before.

Tina, Not many people had heard of Operation Pedro Pan. Not much had been written on the subject until the kids that went through it had children of their own and then realized—felt the weight of their parents difficult choice. Personally, I had stored those memories in the "things that happen that you can't do anything about, so why worry," mental folder. I dredged them out for my parents and my children and to make the the point that kids are infinitely resourceful when it comes to dealing with difficulties that life dishes out.