Book Review: The Wake of the Lorelei Lee: a Bloody Jack Adventure, by L.A. Meyer (Harcourt, 2010) 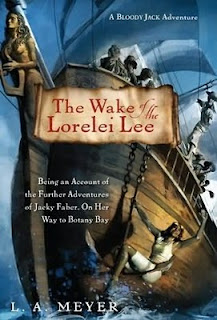 
One of my favorite characters in young adult literature, the now 16-year old intrepid Jacky Faber, is back in her 8th action-packed adventure, having somehow survived everything from life on London's streets as an orphan, to pirates, life at a snooty New England girls' school, spying in Napoleon's army, serving as a naval lieutenant, and diving for Spanish gold (these are only a few of Jacky's many adventures that take place in prior novels in the series).

Now rich after skimming just a little bit of gold from the treasure she dutifully turned over to the Crown , Jacky has purchased and outfitted the Lorelei Lee to carry immigrants across the Atlantic.  Our Jacky is never one to miss a potentially lucrative business opportunity!


Jacky docks in London to finally marry her beloved Jaimy and hire her crew, but alas, things never go smoothly for our spirited heroine.  She discovers Jaimy has been imprisoned and she herself is arrested and will surely hang for her supposed crimes against the Crown.   But once again, Jacky escapes the hangman's noose and instead is  sentenced to be transported along with more than 200 other female convicts to become "breeders" in the newly formed penal colony in Australia.


Having confiscated Jacky's ship, the Crown uses the Lorelei Lee to carry Jacky and a motley passenger list of madams, whores, and petty thieves. But all is not lost, for who should sign on as purser but Jacky's dear friend and frequent savior Higgins.
Not knowing whether she'll ever see her Jaimy again, she decides to make the best of things on her long voyage.  Never one to succumb to boredom, Jacky takes advantage of the ship's stops to take on fresh food and water to dive for coins like a mermaid, to the amusement of sailors on other ships.  On their long journey to Australia, Jacky manages to pick up an "untouchable" orphan in India, who joins the ship's crew.  Along the way, Jacky later becomes the personal pet of Cheng Shih, a female Chinese pirate who controlled one of the largest pirate fleets in history.  While Jacky is travelling the world on her way to Australia, what has happened to Jaimy?  Meyer doesn't shy away from coincidence (or is it fate, or karma?), and Jaimy, too, is on his way to Australia in a convict ship.  Will they ever be reunited?


As usual, Meyer incorporates real historical events and personalities into Jacky's somewhat fantastic adventures.  In this novel, Meyer was clearly inspired by the real voyage of the British ship Lady Juliana, which sailed in 1789 (some years before 1807, when this novel takes place, according to the author's timeline for the series).  The Lady Juliana carried 226 female convicts sent to help increase the population of the fledgling colony. The ship became known as a “floating brothel,”with crew members and possibly some of the ship’s female cargo making money from the sex trade in various ports of call.  Meyer uses the names of the actual women on this ship, including Mary Wade, the youngest of the convicts (sentenced to hang at age 10 for stealing clothes), and Esther Abrahams, a Jewish prisoner who married one of the ship's officers and later became the first First Lady of Australia, as characters in his story; these women are often known as Australia's founding mothers and have been the subject of several documentaries.  Jacky's pirate friend, Cheng Shih, was also a real person.

Although Jacky and Jaimy never seem to get together long enough to consummate their relationship beyond passionate kissing (and in this volume, a racy scene in a bathtub), Meyer hints at a possible love relationship between Jacky and pirate Cheng Shih, although no details are provided.  The extent of this relationship is left largely to the reader's imagination.

As a huge fan of this series, I enjoyed reading Jacky's newest adventures, although I must say this was definitely not my favorite volume in the series.  Meyer alternates the narration from Jacky to Jaimy, and I didn't find the Jaimy sections as interesting.  My 15-year old daughter, also a Jacky fan, said she skimmed over all the Jaimy parts to get back to Jacky, and I did a bit of the same.  I found that this switching back and forth didn't work well, since it distracted from the main character.


Still, fans of the series will definitely want to pick this one up.  For readers new to the series, you'll want to read them in order, starting with the first volume, Bloody Jack.  This series is also available on award-winning audiobooks, which are some of the best I have ever heard.  For more on Jacky, visit her website or see my earlier post about this character.

Release date:  September 2010
Posted by Fourth Musketeer at 5:00 AM

One thing I've always wondered about: why has Jacky been 16 for the past, oh, 4 years of the series? doesn't time exist? Shouldn't she be around 20 by now?