Review: The Wonder of Charlie Anne, by Kimberly Newton Fusco (Alfred A. Knopf, 2010) 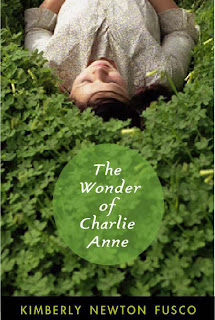 Kimberly Newton Fusco's new novel, her second book for young people, introduces us to the spirited Charlie Anne, who narrates this unforgettable story of family, friendship, prejudice, courage, and vinegar pie set in a small town during the Depression.  An interview with Kimberly will appear in my blog tomorrow.

Charlie Anne's mama has just died in childbirth when the story begins.  Her "new mama," come to take care of her and her four siblings, is her cousin Mirabel, who showed up with all her suitcases and her no-nonsense manner to take charge of her Papa and her whole family.  Charlie Anne is saddled with all the domestic chores, from doing the wash to making vinegar pie, and only can escape when she visits the nearby river, where her mother is buried.  At the river, Charlie Anne tells her mother all her news.  Times are hard, with luxuries like lemon drops so precious that the kids take a lick and put the candy back in their pocket for later.  But when Charlie Anne's beloved Papa tells her he has to take a job up north building roads, taking her brother Thomas along, she is so angry at his separating her family she won't even let him hug her goodbye.

Charlie Anne's town  is small, so small that there's not even a school teacher--their school has been boarded up for over a year.  Charlie Anne doesn't mind, because the letters dance around and make no sense to her, and the old teacher made her stand in a trash bucket because she couldn't read properly.  But life changes for her when Old Mr. Jolly, her neighbor, who isn't really so old, gets a new wife, Rosalyn, who dresses in pants and arrives with an African-American girl, Phoebe, about Charlie Anne's age.  Charlie Anne "never saw a colored girl up close before," and she's not sure "if Mirabel will let me play with a colored girl or not." And can Mr. Jolly really take care of a wife when he can't even take care of his cow, Belle, wonders Charlie Anne.

Mirabel wants Charlie Anne to stay away from Phoebe, instead making Charlie Anne listen to The Charm of Fine Manners, a book designed to teach Charlie Anne to be a proper young lady and succeed in life.  With the arrival of Phoebe into town, prejudice rears its ugly head, in subtle and not-so-subtle ways.  Hardly anyone will even eat the "glorious" chocolate cupcakes Phoebe and Rosalyn bring to the weekly after-church picnics.  And when Rosalyn suggests during church services that, as an experienced teacher, she would like to re-open the town school, using Phoebe as her assistant to help with the younger students, the townspeople gasp in shock.  No colored girl will be teaching in their town, they whisper.  Pretty soon, things are "all riled up," with racial hatred turning things ugly.  Can the school succeed?  Can Rosalyn help Charlie Anne make sense of the dancing letters on a page...and what will happen to Charlie Anne and Phoebe's friendship?  Will her family be reunited?

Charlie Anne's personality is so alive it pops off the page.  I particularly liked her many moods, including her "mad-as-a-yellow-jacket face."  Charlie Anne's unique relationship with family cow Anna May and her daughter Belle adds both humor and pathos to the story, as Charlie Anne translates for the reader what the cows are saying and feeling.  "Their eyes fill with cow-sorrow," and "cow-worry," and "the two of them tell me how very sorry they are that I am having enough troubles to fill a wheelbarrow."   Charlie Anne's charismatic voice narrates not only scenes of every day drama, such as bee stings, falls off swings, peeling potatoes, harvesting tomatoes, Christmas pageants, and kittens born in the barn, but also more profound problems, such as broken families and racism.

This is a book that made me laugh and made me cry, with a main character you won't soon forget.  Highly recommended for school and public libraries, it would make a great selection as well for book clubs for young people since there is wealth of material for discussion.

An excerpt from the novel is available here:

Check out an excerpt from the audiobook version as well.

I really liked it--Charlie Anne was one of those heroines that really sticks with me. I think I like those ones with gumption! (or was it the vinegar pie??? I may have to try that some time!)