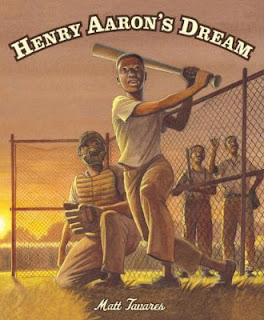 Somewhere in my childhood scrapbooks, I have the 1974 Sports Illustrated cover and article from when Hank Aaron broke Babe Ruth's home run record, and I can remember the excitement of that time.  In this beautifully illustrated oversized picture book, award-winning author/illustrator Matt Tavares concentrates not on his home run record, but on the childhood and early career of baseball legend Hank Aaron.  Tavares has previously published three other picture books about baseball:  Oliver's Game (Candlewick, 2004), Zachary's Ball (Candlewick, 2000) and Mudball (Candlewick, 2005).

The book opens with a full-page illustration of a baseball field, seen through a fence with a large sign, prominently featured, reading WHITES ONLY.  We then meet Henry Aaron as a young boy in Alabama who wants to be a big-league baseball player.  So poor that he can't afford a bat or a ball, Henry's father  reminds him that there "ain't no colored ballplayers."  There were no baseball diamonds, either, in Mobile, Alabama, either, where black kids could play ball.  When a baseball field for "Colored Only" finally opens, young Henry spends all his time there practicing, till he can hit the ball harder than anyone else.  Henry's whole world changed in 1947, when Jackie Robinson broke the color barrier with the Brooklyn Dodgers, and Tavares depicts a glowing young Henry watching his idol play an exhibition game in Mobile.

Henry started his career in the Negro Leagues, figuring that might be his best chance to be discovered.  His teammates knew he wouldn't be in the Negro Leagues for long, and soon a scout for the Braves spots Henry, offering him a minor-league contract.  Like Robinson, Aaron was called racial epithets by white fans, and sent threatening letters.  He even had rocks thrown at him.  Tavares writes:


Henry didn't understand why they hated him.  All he wanted to do was play baseball...but then he remembered Jackie Robinson and all he had gone through to pave the way.  And he remembered his teammates from the Negro Leagues, who never got the chance to live their dream.  Henry focused on the ball and tried to ignore everything else.

Oversized illustrations done in watercolor, ink, and pencil spill onto two pages, and convey a monumental, sculptural quality, especially in the use of action close-ups, that suit very well the great accomplishments of Henry Aaron.  The use of earth tones and glowing light also evoke the not-so-long ago era when black and white players began to play baseball together, but couldn't stay in the same hotels in Southern cities or even play checkers together.  We see Henry and the other two black players on his minor-league team sitting in the kitchen playing cards while their white teammates celebrate at a big party in a Savannah restaurants, where blacks were not allowed.

Here's another illustrations from the book; Aaron's classic pose in the outfield reminded me of a Greek or Roman statue of an athlete.  I particularly liked the perspective, in which the artist makes Aaron huge and everything else in the image is very small, which emphasizes his great stature as a baseball player. 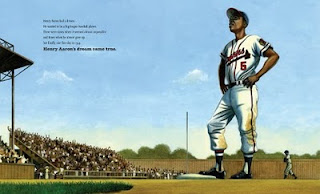 An author's note provides additional biographical information about Aaron, including not only how he broke Babe Ruth's home run record in 1974, but how he spoke out about the racial injustice he faced in baseball.  A chart of Aaron's baseball stats is also included, as well as a bibliography.

An interview with Matt about this book can be found at Seven Impossible Things Before Breakfast.

For adults or teens wanting to read more on Hank Aaron, a biography entitled The Last Hero:  A Life of Henry Aaron by Howard Bryant (Pantheon, 2010) is available.
Posted by Fourth Musketeer at 5:00 AM

Nice review. It is a gorgeous book.