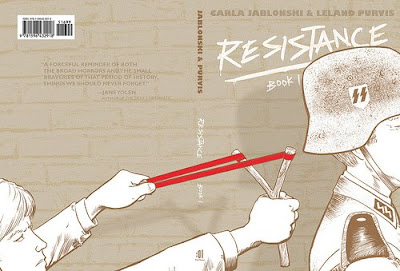 
The variety and quality of graphic novels for both young people and adults that are published in the U.S. and abroad is growing every year, and Resistance, the first in a new trilogy of graphic novels about the French Resistance during World War II is a worthy addition not only to graphic novel collections but also to the wealth of Holocaust literature for children and teens.

The author opens the story by providing some necessary historical background on the Nazi innovation of France in 1940 and the subsequent division of the country into Occupied France, run directly by the Nazis, and "Free France," run by the Vichy government, who collaborated with the Nazis.  Paul, a budding artist, his sister, Marie, and his mother live at the Hotel Tessier; Paul's father is a prisoner-of-war.  Paul's own drawings, with ragged edges that make it look as if they were torn straight from his sketchpad, provide a running commentary on the plot, and are interspersed with the story panels, offering his personal insights into the characters he encounters.
However, Paul's problems are nothing compared to those of his friend Henri Levy, a Jew who they hide in their wine caves when the Nazis take over their hotel.  As the Nazis begin deporting Jews and closing Jewish businesses in the Occupied Zone in 1942, Paul, Marie and the other children in the town struggle to understand what is going on.  "Is it bad to be Jewish?" Marie asks her brother.  "Of course not," he replies, but he's unable to explain to her why the Jews are being taken away.
When Paul learns of the secret Resistance movement fighting in many ways against the Nazis, he wants to help.  While initially he's told he's too young, the local leader realizes that young children could be perfect for transporting information, since no one would suspect them.  Soon they are given a test, to see if they are trustworthy.  Paul's drawing talent even comes in handy, when he is asked to draw vehicles the Nazis have at the hotel and anything that they install on the grounds.  Quickly they are entrusted with a dangerous mission--transporting information to Paris right under the Germans' noses--and helping their Jewish friend Henri locate his parents.
The suspense builds on the train ride, as violence erupts.  Will Marie and Paul be able to complete their first mission successfully?
Jablonski does a terrific job in recreating the confusion and moral ambiguity of the period.  In a thoughtful Author's Note at the conclusion of the story, she discusses the role of ordinary people who took action against the Germans to liberate France.  However obvious right and wrong seems to us now, Jablonski points out that there "are different versions of 'the truth,'...History as lived is anything but clear!...what seems obvious to us now was probably not at all obvious to anyone then."  She emphasizes the difficulty of making choices--even if that choice was doing nothing.  Purvis' illustrations, ranging from his grim depictions of Nazi roundups and deportations, colored in dark tones of blue and gray, to the angst-filled expressions on the passengers' faces while having their documents inspected by Nazi soldiers on the trains, greatly enhance the suspense and drama of the story.
Jabonski is the author of numerous other novels for teens and middle-grade readers, and she is also an actress, playwright, and trapeze performer (!)  Purvis has illustrated numerous other graphic novels for young readers, including several historical fiction titles.

There are not a large number of graphic novels for young people focusing on this period; however, teen readers who are interested in the period might want to read the graphic novel classic Maus I:  A Survivor's Tale, by Art Spiegelman; younger readers (9-12) may want to consider the graphic novel Goodbye Marianne:  A Story of Growing Up in Nazi Germany, by Irene Watts and Katherine Shoemaker (Tundra Books, 2008).
Two other excellent historical fiction titles for young people about the French Resistance are For Freedom:  The Story of a French Spy, by Kimberly Brubaker Bradley (Laurel Leaf, 2005), and Sirens and Spies, by Janet Taylor Lisle (Aladdin, 2002).   These are both suitable for ages 10 and up.
On a related note, a graphic novel of the iconic Holocaust book, Diary of a Young Girl by Anne Frank, has just been published in Europe and will be published in the U.S. later this summer (see link below).
Related articles by Zemanta