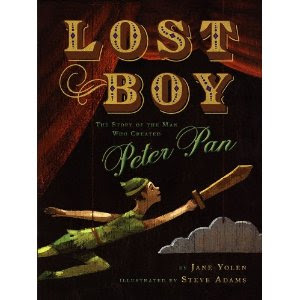 
Jane Yolen's newest offering is a lovely picture book biography of J. M. Barrie, author of many works but known today primarily as the creator of the beloved character of Peter Pan.  This new book is particularly timely because this year is the 150th anniversary of Barrie's birth.

I'm afraid the little I knew about the real J. M. Barrie comes mostly from the 2004 Johnnie Depp/Kate Winslet film Finding Neverland, which focuses on his friendship with the family whose boys inspired the Peter Pan stories; like many historical movies, it takes plenty of liberties with the actual events.
Yolen's book begins, appropriately,"once upon a time," with Barrie's birth in a small town in Scotland in 1860.  Born into a large family that lived in a tenement row house, Barrie liked to talk about his poor beginnings; Yolen points out, however, that he exaggerated his humble start, and his family was in fact "moderately prosperous" for the time.  We can see the inspiration for Wendy in Barrie's mother, who gathered the children around her in the evening to tell stories and read aloud from library books.  Young Jamie is a storyteller from the beginning, writing stories and plays that he would read to his mother or act out with his friends.  When he is sent away to school, he becomes enamored of the theatre, starts a theatrical society, and becomes determined to become a writer.
Within a few years after he completes his education, his stories begin to be published in many magazines, and he became well-known.  But as Yolen writes, "he was still as small as a boy, just over five feet tall...he hardly looked famous."  While walking his enormous St. Bernard dog, Porthos (coincidentally one of the Three Musketeers!) Jamie meets the Llewelyn Davies boys, whom he begins playing with in the park, making up wild stories about pirates, Indians, fairies, islands, and more.  This family became very close to Barrie, but it was not for another six years or so that he began writing his masterpiece, Peter Pan.  Written originally as a play, the extravagant production, complete with flying actors, was an enormous success, and because Barrie donated the copyright to London's Great Ormond Hospital for Sick Children, the financial rewards continue to benefit needy children.  Yolen remarks that while most of Barrie's other works have been forgotten, the boy who never wanted to grow up will indeed live forever, not only as a play, musical, movie, and book, but even remembered in other products as mundane as peanut butter.
The rich layout of this oversized picture book features two page spreads consisting of a one-page full-color painting depicting a real scene from Barrie's life, while the facing page contains biographical text along with a small inserted painting, depicting a related scene and quotation from one of Barrie's Peter Pan stories.  This juxtaposition of the real and imaginary is very effective, and makes the quotes from Barrie's stories even more poignant.  The artwork, with its elongated oval faces and muted palette, reminded me of Italian artist Modigliani; while it is very beautiful, I would have preferred a more Victorian look for the artwork to fit in with the time period.  However, there is a melancholy quality about the illustrations which seems to suit the sadder episodes in Barrie's life. 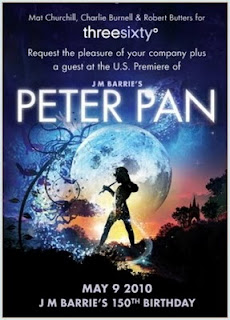 Peter Pan fans will be interested to know that a spectacular new theatrical production, straight from a sold-out run in London, is currently playing in San Francisco and will be coming to Orange County, California at the end of September.  From the San Francisco Sentinel: "Conceived by an award-winning creative team and featuring 22 actors, puppets, epic music, dazzling flying sequences and the world’s first 360-degree CGI theatre set, Peter Pan is a complete theatrical adventure. The cast features members of the original London production joined by local...actors making it a truly international company. The production is done in a tent theatre in the round, with state-of-the-art CGI effects." In this version, Peter Pan is actually played by a male actor, not an actress!  It's on a 20 month U.S. tour, so clearly the show will be traveling to other U.S. cities as well, but as of yet these other stops are not announced on the play's web page.
Posted by Fourth Musketeer at 5:00 AM

The book sounds lovely. I was very taken with "Finding Neverland," but when I read a bio of Barrie, I found that his relationship with the boys seemed quite creepy, which kind of spoiled the impression I had from the movie.