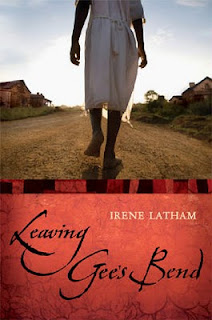 Although my local libraries hadn't purchased this debut novel by Irene Latham, I decided to buy it after a glowing recommendation from Jame Richards, author of Three Rivers Rising.   Leaving Gee's Bend has been getting some well-deserved pre-Newbery buzz, and was also picked for the Spring 2010 Indie Next List.
Latham was inspired to write this book by an exhibit she visited in New York on the quilts of Gee's Bend, a small rural community in Alabama. After the Civil War, the freed slaves, who worked as sharecroppers, founded an all-black community nearly isolated from the surrounding world. The town’s women developed a distinctive quilting style passed down through at least six generations; these quilts have been exhibited in a museum show which toured major museums around the country.
Here are some examples of some of their unique quilt designs: 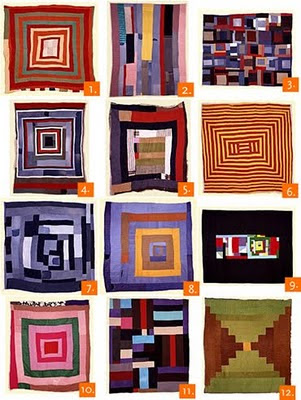 Set in 1932, the novel Leaving Gee's Bend incorporates both the inspired quilting heritage of this small community and its isolated geography to tell the story of ten-year old Ludelphia, who may have only one eye that works but still has plenty of chores to do.
Her mama's about to have a baby any minute, and is sick with a terrible cough, but the one thing that can make Mama smile no matter what is stitching quilts.  Ludelphia tells us:

Mama always says every quilt tells a story.  Every piece of cloth, every stitch and every bit of cotton stuffed between the seams tells a secret about the one who made the quilt.

Ludelphia's beginning a quilt all about her own story, intended as a special gift for her Mama.  She's always got a needle and bits of cloth in her pocket, and has been sewing since she was a "little bitty girl."  Her Mama says she was "born to stitch," but their family's so poor she makes use of scraps from patched up clothes.
When Mama's baby comes too soon and Mama gets even sicker, Ludelphia decides she has to go fetch a "real doctor" all the way from Camden, even though there's no money to pay him.  But to get there, she has to cross the river, and she's got no time to wait for the ferryman.  Crossing by herself, she winds up way downstream, where Ludelphia discovers a new world, one with fancy houses for white people with real glass panes, motor cars, delicious food, and even genuine Coca-Cola.  But there's danger too, with a crazy white lady who threatens to come to Gee's Bend and take everything they've got.  But Ludelphia knows she can't give up, no matter what.  She's got to help Mama, and also help her neighbors in Gee's Bend.
Quilting throughout this book is a metaphor--as she pieces a quilt, Ludelphia has to figure out where to put the pieces of cloth, but also the pieces of her life.  And some stories just can't go in a quilt, Ludelphia tells us--you have to keep them in your heart.
While this story is fictional, the author incorporates some real incidents in the history of Gee's Bend into her narrative, which she discusses in an Author's Note.  This is a heartwarming novel with a strong female protagonist who takes charge of her own destiny, no matter how frightening.
Latham is definitely a new talent to keep your eye on; her next middle grade novel, Don't Feed the Animals, is about the son of a zoo director mom and elephant keeper dad who struggles to escape the confines of zoo life.  I'm looking forward to reading that one!
Also, take a moment to check out Latham's terrific blog; I especially liked her recent post Embracing My Inner Barbie, inspired by Toy Story 3 (I am a closet Barbie collector--quite literally, since they are all in my closet these days!).
Those interested in learning more about Gee's Bend might also enjoy reading a recent picture book on the topic by Patricia McKissack and Cozbi Cabrera,  Stitchin' and Pullin': A Gee's Bend Quilt (Random House, 2008). 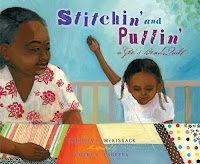 Leaving Gee's Bend is the third excellent book published this year that's set during the Great Depression and features a memorable girl heroine; perhaps it is our own economic crisis that is inspiring writers for young people to reach back to the 1930's, another difficult era in our history.  The other two are Kimberly Newton Fusco's The Wonder of Charlie Anne and Jennifer Holm's Turtle in Paradise.

Margo, what an honor! And what a comprehensive post. I love it when bloggers take the time to include all this additional info -- really makes it fun for the reader. And hello, as the author?? You totally made my day! THANKS!

This book sounds wonderful, a good fit for the younger end of the middle graders I review for--thanks for the review! Here's another terrific book set in the Great Depression, this one in Canada: "Growing Up Ivy," by Peggy Dymond Leavey. Here's my review:

Glad you enjoyed Leaving Gee's Bend as much as I did! Great idea including pictures of the quilts---I"m a big fan, too!

Do you drink Coca-Cola or Pepsi?
PARTICIPATE IN THE POLL and you could win a prepaid VISA gift card!