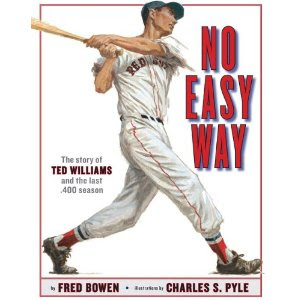 
No matter who does the ranking, no baseball fan would argue about Ted Williams being one of the greatest baseball players of all time.  Yet there are not a lot of books for young people about him, perhaps because in addition to being a great player, he was also known for being temperamental, demanding, and having an adversarial relationship with the press and sometimes with fans.  I was therefore eager to read Fred Bowen's new picture book about this baseball icon.  Bowen, as a sports columnist and a writer of sports fiction for kids, seems particularly well qualified to tackle this subject.

Rather than write a conventional biography of Williams, Bowen chose to concentrate on Williams' 1941 season with the Red Sox, the year he hit .406, a feat no other baseball player has come close to equalling in the following 60 or so years.  We learn a bit about Williams' background growing up in San Diego in the 1930's, during the Depression.  Right away Williams' enormous ambition is highlighted:


From the time he was young, he knew exactly what he wanted to be.  "My dream was to walk down the street and have people say, 'There goes Ted Williams, the greatest hitter who ever lived.'"

Bowen emphasizes Williams' dedication to the sport, and the hours he spent practicing, before and after school, until blisters grew into hard, ugly calluses on his hands.  Why spend so much time practicing?  Because Ted "knew there was no easy way to become the greatest hitter who ever lived.  No easy way to do the single most difficult thing in sports:  to hit a round ball with a round bat." No other player, Bowen tells us, practiced more than Ted, even when he made the major leagues, not only swinging the bat over and over but also squeezing rubber balls to make his wrists and forearms strong.

All this practice pays off in the extraordinary 1941 season, when not only was Joe DiMaggio hitting in a record-breaking 56 straight game streak, Ted Williams was hitting consistently all over American ballparks--could he hit the magic .400 batting average?  By the end of the season, his average had dropped to .39955 with only two games to play.  He could sit out those last games, and stick with his average, which would have been rounded up to .400, according to baseball rules.  Even his manager thought he should sit out the last two games.  But that would be taking the "easy way out," and that wasn't Williams' style.  Although we know the results in advance, Bowen's exciting narrative builds a suspenseful mood as Williams takes his at-bats during the last two games, a double-header against the Philadelphia Athletics.  And the Athletics weren't going to make it easy for him....we almost hold our breath as Bowen describes how Williams, with his stupendous performance in this double-header, raised his average to a stellar .406.

This book is a great addition to baseball collections, and could be enjoyed by baseball fans young and old.  I particularly appreciated the way Bowen emphasized Williams' work ethic and his commitment to practicing.  An afterword with additional biographical information on Williams' life would have been a nice addition.  I also want to give special praise to Charles Pyle's old-fashioned illustrations, which brought to mind classic American illustrators such as Norman Rockwell; they complement the text perfectly, capturing Williams' speed and power but also the innocence of an earlier baseball era, with scenes of Williams eating an ice-cream cone and young boys selling newspapers from canvas bags.

For more on Ted Williams, see his official website, and visit a slew of interesting articles on the Red Sox website.  A new documentary about Ted Williams and his career aired on HBO last summer, although it doesn't appear to be available for purchase.

Also, baseball fans will want to watch for an upcoming picture book entitled The Unforgettable Season: Joe DiMaggio, Ted Williams and the Record-Setting Summer of 1941, written by Phil Bildner and illustrated by S. D. Schindler, a Putnam Juvenile title due to be released in March of 2011.

Nice write-up. I enjoyed it as well and agree that the marriage of text and illustration is perfect.