Book Review: Take Me With You, by Carolyn Marsden (Candlewick Press, 2010) 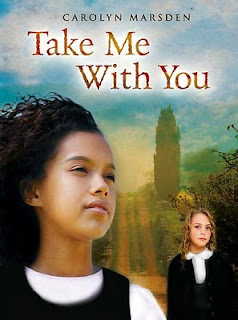 Carolyn Marsden  is well known for her middle-grade novels set in other countries or focusing on multi-cultural themes.  In her newest novel, she takes us to Naples, Italy, a few years after the end of World War II, where Pina and Susanna are best friends who have lived together since they were babies in a Catholic orphanage.  Both girls believe they are orphans, and hope with all their heart to be adopted.  A nice family is sure to adopt the beautiful Pina, with her golden hair and creamy skin.  But who will want Susanna, a mulatta, or mixed-race child, whose father must have been a black American soldier.  Perhaps La Befana, an angel who hides presents on Three Kings' Day, will grant her wish for parents to adopt her.

Imagine Susanna's surprise when Sister Anna calls her into her office one day and tells her that she's received a letter from a man who may be her father.  An American sailor, he is on a "tour of duty."  Will he come soon? Pina, too, is in for a surprise, when she discovers that her mother is indeed alive, and living right there in Naples.  Whose parent will show up?  Will the two friends have to abandon one another?

Finally, a very dark man in a blue sailor's uniform visits the orphanage.  Susanna's big moment has arrived, but instead of throwing herself at him, "she wanted to cover her face with her hands."  But he soon leaves, promising to return.  Pina, on the other hand, is desperate to find her mother, and together with Susanna, discovers her address and goes off to find her in Naples.  But for both girls, their fantasies about their families do not work out exactly as planned. Will both girls get the loving families they deserve?

This bittersweet tale of two Italian orphans will capture the hearts of middle-grade readers, particularly girls who are drawn to orphan stories.  Marsden captures for young readers the atmosphere of the Italian orphanage, with its (mostly) kindly black-garbed nuns who drag the girls around Naples to sing for funerals and teach them to crochet blankets, which are sold to support the orphanage.  Life is not all drudgery, however, with outings to the movies and to the beach also described.

At 160 pages, this slender novel is a good choice for students in grades 3 through 5 who are ready to graduate from beginning chapter books to slightly more complex stories.

Take Me With You was selected as one of Booklist's Top 10 Historical Novels of 2010, and I would recommend this book for both school and public libraries.
Posted by Fourth Musketeer at 5:00 AM

Thanks for reviewing. This is definitely going on my TBR list.

I have loved Marsden's other books (esp. Moon Runner and the Gold Threaded Dress. This looks great. thanks for the review!

Hi Margo,
This looks like a really interesting book and I am definitely going to read it. I am just as interested in post war fiction as I am in war fiction for young readers.
Thanks for the review.

I've been horrible about posting awards. I finally got around to posting your Versatile Blogger award. Thank you so much!