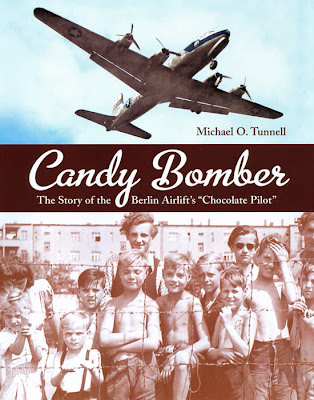 "This is a true story of chocolate, bubble gum and hope."

I thoroughly enjoyed reading Michael O. Tunnell's inspirational account of how one person can make a difference in the world. Tunnell tells the story of U.S. Air Force Lieutenant Gail Halvorsen, who was one of a group of U.S. and British pilots transporting food to the citizens of West Berlin in 1948 during the Soviet blockade of West Berlin. Tunnell provides concise and well-written background on what happened in Germany at the end of the war and how this blockade came about in the first place.

When Halvorsen first encounters the children of West Berlin, he is struck by their dignity and their commitment to freedom. After briefly conversing with a group of children on the other side of the airfield fence, he decides, on a whim, to give the children the two sticks of Doublemint gum in his pocket. Breaking them in half, he is sure that a fight over the four little sticks will break out among the candy-starved children. Instead, he is astonished to see that there was no fighting:


The lucky four who had plucked the half sticks from his fingers kept the gum, but they ripped the wrappers into strips, passing them around so everyone could breathe in the sweet, minty smell. "In all my experience, including Christmases past," he [Halvorsen] recalls, "I had never witnessed such an expression of surprise, joy, and sheer pleasure."

Suddenly, Halvorsen had an inspiration; why not drop some gum and candy on his next trip to Berlin? He told the delighted children of his plan, and they asked how they would recognize his plane. Halvorsen explained that he'd give them a signal--"When I get overhead, I'll wiggle the wings."

Halvorsen began his drops by asking his buddies to donate their personal candy rations, rations that were as valuable as currency in Germany. Not asking permission of his superiors, Halvorsen started his candy drops, using handkerchiefs to make parachutes in order to drop the candy in small packages. Soon mail began to pour in for Uncle Wiggly Wings or the Chocolate Pilot, and Halvorsen's superiors discovered his secret. Halvorsen was sure his candy dropping days were over, but instead the military was delighted with the terrific publicity the candy drops were generating. The Air Force adopted the name "Operation Little Vittles" for the candy drops and even hired two German secretaries to deal with all the incoming mail. The campaign soon spread, leading to candy drops all over the city, and donations of candy from individuals and companies in the United States, and as far away as Australia.

Lt. Halvorsen became a media celebrity, and became a hero to the children of West Berlin. It's hard for us to imagine today what these gifts of candy meant to the children of Berlin, and Tunnell has collected many anecdotes which allow us to experience their feelings. One Berliner remembered walking to school when he was ten:


"Suddenly, out of the mist came a parachute with a fresh Hershey chocolate bar from America," he recalled. "It took me a week to eat that candy bar...the chocolate was wonderful, but it wasn't the chocolate that was most important. What it meant was that someone in America cared. That parachute was something more important than candy. It represented hope."

Halvorsen continued his career with the Air Force long after the candy drop ended, but he and the children never forgot. In fact, when he returned to Berlin in 1970 as Commander of the base there, he was deluged with dinner invitations from grateful children, now grown. Halvorsen was even given the honor of leading Germany's team into the arena in Salt Lake City during the 2002 Winter Olympics. The book concludes with a biographical note about additional humanitarian missions Halvorsen has participated in, including candy drops to other war-torn regions such as Kosovo. At 87, he was even able to attend a ceremony in Germany commemorating the 60th anniversary of the Berlin Airlift.

The book is lavishly illustrated with photographs and memorabilia from Halversen's personal collection, including some of the hundreds of letters he received from Berlin's grateful children. The author also includes a brief bibliography as well as a historical note providing additional background material on World War II and its aftermath. 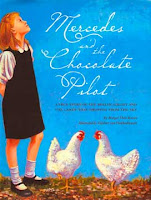 This book would be an outstanding addition to school and public libraries, and could be read in conjunction with Mercedes and the Chocolate Pilot,, a lovely picture book on the same topic by Margot Theirs Raven (Sleeping Bear Press, 2002).  This picture book focuses on the story of one particular child and her encounters with Lt. Halvorsen, but also provides background on the entire chocolate bomber story.

A side note:  today's Los Angeles Times ran a front page article on Tempelhof Airport in Berlin, the airport used by the candy bombers and other pilots who airlifted supplies to post-war West Berlin.  The airport is now used as a big, unplanned, and very popular park, according to the Times.
Posted by Fourth Musketeer at 5:00 AM

I read the Candy Bomber two years ago and really enjoyed it too. It.'s too bad the story has fallen into obscurity. We don't learn enough about the Berlin airlift.

These two books sound great, I'll have to watch for them at the library!

I am so pleased to know about Lt. Halvorsen, the kind children & this story of creative, independent action, rewarded well. I salute him.

It's really a feel-good story; he's a real-life hero.