Book Review: Two Miserable Presidents: Everything your Schoolbooks Didn't Tell You About the Civil War, by Steve Sheinkin (Roaring Brook, 2008) 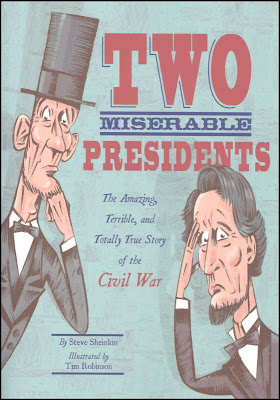 "History--with the good bits put back!"

My teenage son and I are big fans of Steve Sheinkin's graphic novels about Rabbi Harvey, and I wasn't surprised to find out that his series on U.S. history for young readers is just as entertaining. His website describes these books as "guaranteed-never-boring history books, packed with all the true stories and real quotes he was never allowed to use during his career as a textbook writer." Three have been published to date: one on the American Revolution, (King George: What Was His Problem?), another on Western expansion, (Which Way to the Wild West?) , and the one on the Civil War that I am discussing today.

I have been on a bit of a Civil War reading binge since spending three days in Gettysburg last summer (where my daughter complained of Civil War overload); my 14-year old son and I have recently been spending evenings since school got out watching Ken Burns' mammoth Civil War documentary (5 DVD's and 11 hours worth). I watched the series when it was first broadcast on PBS 20 years ago, but it's the first time for my son.

For those who don't want to spend 11 hours watching Ken Burns' documentary, however, Sheinkin, a former writer of American history textbooks, includes much of the same information in a much briefer format, complete with cartoon illustrations by Tim Robinson. Despite the comical look of the series, Sheinkin includes a serious historical overview of the war, which highlights all the key events leading up to the war, from the Fugitive Slave Act to John Brown, the Dred Scott decision, and the Lincoln-Douglas debates, among others, as well as the key events of the war itself. Like Ken Burns, Sheinkin includes many anecdotes from ordinary citizens, as well as highlighting lesser-known participants such as Rose O'Neal Greenhow, a Confederate spy known as the Wild Rose of Washington.

Sheinkin does not forget to profile some of the famous colorful personalities of the war, who continue to fascinate us, such as Stonewall Jackson, Robert E. Lee, Jefferson Davis, George McClellan, Ulysses S. Grant, and of course, Lincoln. Did you know Lincoln was a terrific wrestler? The author also provides plenty of details on ordinary life for soldiers, especially how hungry they were. One story that appears in both Burns' documentary and Sheinkin's book is the following:

John Billings of Massachusetts remembered that the most popular way to eat hardtack (the basis for the Yankee soldiers' diet) was to crumble it up into coffee. One problem: hardtack was often home to weevils and maggots and other bugs. "It was no uncommon occurrence for a man to find the surface of his pot of coffee swimming with weevils," he said, "but they were easily skimmed off and left no distinctive flavor behind." That gives you an idea of how hungry these boys were.

Sheinkin's book ends with Lincoln's assassination, but he provides an excellent "What Ever Happened to" appendix which provides follow-up information on key personalities who appear in his book. He also provides a bibliography of many of the sources he used, which is divided into specific categories including general books on the war, biographies of major Civil War figures, books about everyday life during the war, books on specific battles, memoirs by Civil War personalities, and more.

I highly recommend this book for young readers, not only those who enjoy history but more importantly for those who think history is boring; unfortunately, this is an attitude which is not surprising given how dry our history textbooks for young people are. It even makes a great review of the Civil War for adults who want to brush up on this fascinating period of our history.

I love this quote by Sheinkin about history textbooks:

Why are textbooks so boring? I could explain--but it would be boring. I'll just mention one serious problem with textbooks: they always seem to avoid quotes that are at all funny, amazing, surprising, disgusting, confusing, stupid, mean, or anything else interesting. One of my main goals with this book was to fill it with all the quotes I never got to use in textbooks.

One of the quotes his editors probably cut is the following delightful anecdote about the Confederates' fighting spirit: Sheinkin relates that Southern school books of the era included math problems such as the following:

Here's some pictures of Sheinkin's other history books with the good bits put back:

Thanks for posting about Sheinkin's history books. My wife and I are teachers and history buffs so this is right up our alley.

I'm sure you would enjoy his books! And there's a new one coming out his fall about Benedict Arnold...