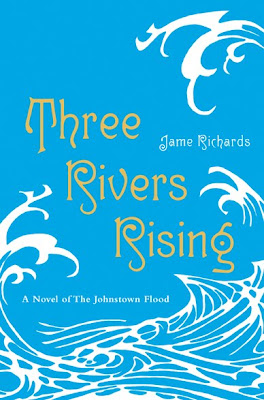 Debut novelist Jame Richards has written a mesmerizing novel in verse set against the shocking backdrop of the Johnstown Flood of 1889, a disaster that could perhaps be compared to Hurricane Katrina in our time. According to the National Park Service website, there was no larger news story in the latter nineteenth century after the assassination of Abraham Lincoln.

The story of the Johnstown Flood has plenty of juicy ingredients to make a compelling novel: an exclusive resort, where the wealthiest of Pittsburgh society vacationed, an intense storm, the failure of a dam, perhaps due to negligence, the destruction of a working class city, and an enormous national and even international relief effort, which included Clara Barton and the Red Cross.

The story, told in free verse by multiple narrators, begins the summer before the flood, giving us ample time to get to know the characters before disaster hits. We first meet Celestia, daughter of a wealthy Pittsburgh businessman, who comes with her older sister, Estrella, and her parents to spend the summer at the South Fork Fishing and Hunting Club, far from "the filth and crowds of the city." The club is at South Fork Reservoir, created by a seventy-foot earthen dam and better known to the owners of the club as Lake Conemaugh. Celestia soon begins a forbidden romance with one of the laborers at the club, Peter, who is from nearby Johnstown. Peter is a boy "not of her rank," and their secret courtship is described in very romantic verse:

Their love is not only taboo, but could get Celestia disowned and cut off from any contact from her family, not to mention getting Peter fired.

We also meet local resident Maura, not much older than Celestia but already with three babies, her husband Joseph, who is a train engineer and will play a key role when the tragedy hits, and Kate, a young widow who leaves the area to attend nursing school.

When Celestia's parents realize she's becoming too friendly with a young man from the wrong side of the tracks, she is whisked off to boarding school in Switzerland, where she soon learns her parents have arranged a suitable marriage for her. But Celestia has her own ideas, and when she arrives at the South Fork club the following summer for what her parents intend to be a quiet vacation before her marriage, she leaves her comfortable life behind and sets off in pursuit of Peter.

What neither she nor anyone else (except, of course, the reader) realizes is that disaster is about to strike. Richards works into the poems that the locals at Johnstown have been joking for years about the dam breaking, but the dam always seems to hold. However, the outlying communities' luck has run out. An unusually heavy rainstorm has clogged the screens put in by the club to keep the lake stocked with fish for the vacationers. With the clogged screens, there is no other outlet for the extra water, and as the people at the club watch in horror, "the better part of the dam just melts,/disappears./The water cannot get out fast enough,/far enough."

When Celestia's father realizes his daughter has run away and is likely in Johnstown, about to be hit by the flood waters, he is filled with regret, and can think only of finding her. Despite his knowledge of the imminent danger, he sets off for Johnstown in pursuit.

As the dam floods the nearby communities, the stories of our different narrators converge, as many residents escape but thousands die, washed away by the flood waters and the debris. Richards also portrays the terrible aftermath of the disaster, as morgues fill with bodies (many of whom were never identified), people look for loved ones, and struggle to survive and rebuild their lives, with the help of both neighbors and strangers alike.

According to her website, Richards was greatly inspired by Karen Hesse's Newbery-winning novel Out of the Dust, inspired by another natural disaster brought on, like this one, at least partially by human neglect.

Richards' novel has received starred reviews in School Library Journal and Kirkus. You can read more about the author's background on her website or you can follow her on her blog. Her website also features a reader's guide for this book.

For more on the Johnstown flood, the author provides a timeline of events concerning the South Fork dam, as well as a bibliography with suggestions of further reading (both fiction and nonfiction) for both young readers and adults. In addition, a great deal of information on the flood is available online: see the Johnstown Flood Museum's website and the Johnstown Flood National Park Service website for this historic site.
Posted by Fourth Musketeer at 5:00 AM

This is one of my favorite books of 2010! Thanks so much for reading and reviewing. Not only is the writing gorgeous, but it's also got cool endpapers. Really special.

One of my favorites also! I hope it will be on the Printz committee's pile--or maybe it could fit for a Scott O'Dell award? Wouldn't it make a great movie, also? I can see lots of great special effects with the flood scenes...