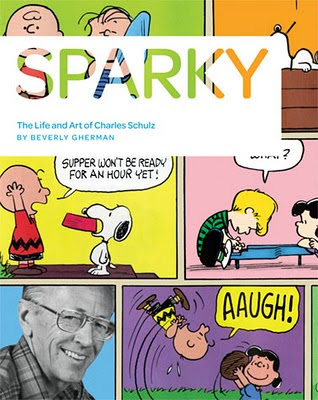 Recommended for age 8 through adult.

Like so many millions around the world, I grew up reading Peanuts, perhaps the most beloved comic strip ever. So I was excited to learn from Betsy Bird at Fuse #8 of a new biography of this comic book icon for young people. Beverly Gherman's book is sure to find a place on library shelves everywhere, and is a must-have for Peanuts fans as well.

Gherman's book, at 125 pages, provides enough biographical information to be useful for school reports, but the striking layout and graphic design, along with the abundant illustrations, make it a relatively quick book to read, even for the youngest comic fans. Personally, I learned many interesting facts about Schulz from this book. Born in 1922, he was nicknamed Sparky before he was a week old, a suitable nickname as it turned out since Sparky was a character (a "sad-eyed horse") from the then-popular comic strip Barney Google.

Sparky never wanted to be anything but a cartoonist from early childhood, and always had a pencil or paper handy for a quick sketch. Gherman intersperses the text with Peanuts cartoons that match the topic; for example, while talking about Sparky's father's barber shop, we read on the opposite page a strip about Peppermint Patty visiting a barber shop. The book also features many personal photographs from the archives of the Charles M. Schulz Museum. We meet people and see interests in Schulz's life who later will appear in his comics, such as Sparky's best friend Shermy, and his mother, a classical pianist, Sparky's great love of baseball, or his failed romance with a redhead who later will appear as "the little red-haired girl."

Schulz was particularly proud of his military service in World War II, where he was honored for excellence in combat. When he returned from the war, his comics were rejected by many publishers, but he finally found work lettering comic strips for a company that produced Catholic teaching aids. At this time he developed his first comics featuring kids, which he finally sold to the St. Paul Pioneer Press as a weekly comic, Li'l Folks. But his career really took off in 1950 when United Feature Syndicate offered him a five-year contract to develop a comic strip, which they renamed Peanuts. Sparky didn't like the new name, but he had little power to do anything about it.

Gherman describes how innovative Peanuts was at the time, with its spare drawing style and its focus on kids dealing with their daily concerns. Peanuts quickly caught on with readers; by 1956, Sparky had not only become financially successful but was honored by his fellow cartoonists with the Reuben Award as cartoonist of the year.

In the book, we also learn about Sparky as a devoted father and family man. His first marriage, however, ended in divorce in 1972 (this is discussed very briefly in the book). Although this was a difficult period for Sparky, he persevered, and later said he had drawn some of his best comics during this time.

Gherman does not neglect to talk about how Schulz worked as a cartoonist. She writes:


Sparky prided himself on always drawing and writing his own strips. He was the only cartoonist who managed to do that for fifty years. He tried to keep his drawings simple and "pleasant to look at." And always funny. He once told an interviewer that he wanted to be remembered for making people happy.

Not only did Schulz make millions of people happy with his beloved Peanuts characters, he continues to do so even after his death, since Peanuts Classics are still published in many newspapers. Gherman, too, will make many people happy with her delightful biography of this king of comic book artists.

The extraordinary design of this book, done by Jennifer Bostic of Paper Plane Studio,deserves special mention. No boring white pages for this book--every color in the rainbow seems to be used for the page backgrounds, with different contrasting colors chosen for the text. In fact, each time the reader turns the page, the page color and text color changes. While some of the combinations (i.e. white text on a bright green background) are a bit difficult to read for older eyes, the energy and vitality that these bright and ever-changing colors lend to the book make the reader eager to turn to the next page.

Here is a excerpt from the book that allows you to see the unique design:

Sparky: The Life and Art of Charles Schulz

The book includes a bibliography of books, magazine articles, interviews, and television programs about Schulz.

I can't resist sharing my own personal Schulz anecdote...as a little girl in the 1960's, I sent Schulz a copy of my "book" Misery is, inspired by his book Happiness is a Warm Puppy.  He sent me a personal letter back--I remember being particularly impressed by his special Snoopy stationery, something that wasn't commercially available in those days.  I still have the letter in my house somewhere, if I could only find it  in all my clutter!

Peanuts fans should plan a visit to the Charles Schulz Museum in Santa Rosa (I haven't had a chance to get there yet, alas, but on my next visit to Northern California...)
Posted by Fourth Musketeer at 5:00 AM

I have loved The Peanuts all my life=)
I will certainly add this book to my wish lists, thanks so much!
Lethea B