Book Review: Young Samurai: The Way of the Sword (Hyperion, 2010) 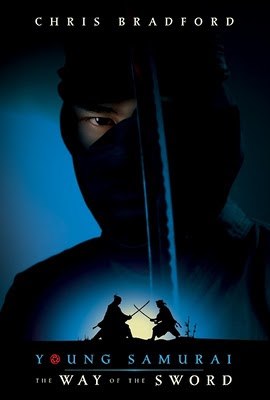 British author Chris Bradford continues his action-packed saga of samurai and ninja in the second installment of The Young Samurai series: The Way of the Sword. Jack Fletcher, shipwrecked, orphaned by ninja pirates, and then adopted by a samurai in 17th century Japan, has completed his first year of samurai school. His problems are not over, however; his classmates still taunt him as a "gaijin" (barbarian foreigner), anti-Christian sentiment is spreading, and worse yet, the evil ninja Dragon Eye is still after Jack and his father's rutter, which contains the secret routes to navigate the world's oceans.

Once every three years, the samurai students have a chance to compete in the ancient ritual of the Circle of Three, testing their mind, body, and spirit. Those who pass this test will be allowed to learn Two Heavens, a secret martial art technique. Selection trials are held, and only the top five students progress to the Circle. Readers will not be surprised that Jack is among this elite group, as is his female friend, Akiko, and Kazuki, his arch-enemy at school. But will Jack be able to survive the competition?

Once again, Bradford peppers his action-adventure story with many details of Japanese life and culture, including four hour tea ceremonies, zen gardens, origami cranes, and more. I would not advise reading these books out of order; readers might be confused without the background from the first book in the series. One observation: the Circle of Three competition reminded me more than a little of the Tri-wizard tournament in Harry Potter and the Goblet of Fire, moved to Japan, with its all-but impossible tasks to complete. Perhaps Harry fights the samurai could be a good topic for a fan-fiction writer!

As in the prior volume, the author includes a useful Japanese glossary, complete with a guide to pronouncing Japanese words. Much of the vocabulary is likely to be familiar to anime and manga fans, however.

You can read an excerpt from this book here.

Four volumes of this series have been published to date in the U.K.; the next volume, The Way of the Dragon, will be published in the U.S. in 2011.
Posted by Fourth Musketeer at 5:00 AM