Book Review: The Other Half of Life, by Kim Ablon Whitney (Laurel Leaf Books, 2009) 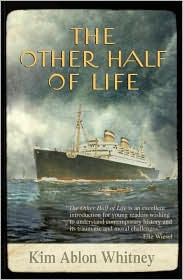 Recommended for ages 12 and up.
Kim Ablon Whitney has written a riveting fictional account of the doomed voyage of the M.S. St. Louis, a luxury ocean liner which sailed from Germany to Cuba in 1939 with 937 passengers, nearly all German Jews desperate to escape Nazi Germany.  Refused safe haven by Cuba and the U.S., the St. Louis was forced to return to Europe; this journey has become symbolic of the indifference of the United States and the rest of the world to the plight of European Jewry on the eve of World War II.


Whitney tells the story of 15-year old Thomas, a fictional character who is representative of the young people who travelled alone on the ship.  His Christian mother is able to afford passage only for one, and with his Jewish father already arrested and in a concentration camp in Germany, she takes the opportunity to send him off to safety in Cuba.


Once on board, Thomas is befriended by the beautiful teenage Priska and her family, who are sailing in first class.  Priska and Thomas are attracted to each other, and soon there is romantic tension to our story.  However, the irony of sailing on a luxury ocean liner, with caviar, swimming, and dancing, is not lost on Thomas or the largely Nazi crew, who are ordered by the Captain to treat the Jewish passengers with the same respect as they would treat the passengers on any other luxury ocean crossing.  From the outset, Thomas has a feeling that, despite their landing permits for Cuba, arriving safely is not guaranteed.  When he overhears the crew whispering about Cuban quotas possibly already being full, he resolves to keep his ears and eyes open.


When the ship drops anchor outside the Havana harbor, Thomas and the other passengers realize there is a problem.  While negotiations with the Cubans proceed, Thomas and his friends organize a chess tournament to distract the passengers.  Thomas is a skilled chess player, and chess serves as a metaphor for the passengers of the St. Louis, who are being used by the Nazis as pawns in an elaborate propaganda game.  Was the whole trip a ruse on the part of the Nazi government--to show that  no one in other countries wants the Jews either?


When Cuba refuses the passengers entry, the Captain sails to Miami, in the hope that the United States will take in the refugees, but the U.S. government, too, refuses to allow the ship to dock.  Forced to turn around, the St. Louis returned to Europe, where the passengers were taken in by England, France, Belgium, and Holland.  Sent to different countries, Thomas and Priska vow to meet in five years in Miami, never dreaming how the war would change their lives.  Will they reunite?


The author concludes the novel with a moving account of Thomas and his family, 70 years later, visiting an exhibit on the St. Louis at the U.S. Holocaust Museum, where he sees life-size photographs of himself and others he befriended on the voyage.  In this final chapter, he tries to explain to his children why the United States didn't let them in, especially since over 700 of the passengers already had quota numbers for the U.S.  This is a question with no good answer.


On the author's blog, she reports on a talk given by Nobel Laureate and Holocaust survivor Elie Wiesel on the 60th anniversary of the St. Louis' fateful voyage.  In his talk, he calls the St. Louis "the Moral Titanic," and spoke of the shame of the leaders of the free world who "failed the test of humanity" in turning the St. Louis away.  Wiesel singled out for praise, however, Captain Schroeder, whom he called the hero in the story (Schroeder was later honored as a "Righteous Gentile").  Wiesel, according to Whitney, ended his talk by concluding that all questions regarding the St. Louis remain unanswered. He stressed that what we can take away as students of history is that, as proven by Captain Schroeder, choice always exists.


As Whitney explains in an author's note, nearly all the characters in the book, with the notable exception of Captain Schroeder, are fictional, but are based on extensive research on the voyage, including her own interviews with survivors.  This outstanding novel has been honored with numerous awards, including the 2009 National Jewish Book Award, the Silver Parents Choice Award, and it was selected as a Sydney Taylor Notable Book for teen readers.


A Teacher's Guide, author interview, and excerpt from the book can be found at the author's website.


A concise article summarizing the facts about the St. Louis as well as an on-line exhibit  can be found at the U.S. Holocaust Museum's website.


Also, the U.S. Holocaust Museum published in 2006 Refuge Denied:  The St. Louis Passengers and the Holocaust, a comprehensive study of what happened to the 937 passengers on board the ship.
Posted by Fourth Musketeer at 5:00 AM