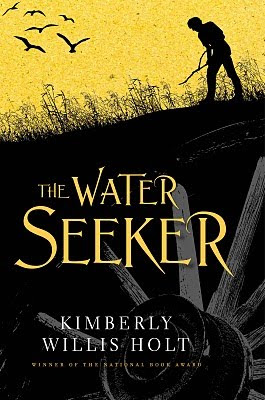 Award-winning children's author Kimberly Willis Holt offers a lyrical coming-of-age story set against the harsh reality of pioneer times and the Oregon trail in her newest novel. The central character is Amos, born in 1834, the son of a dowser, or water-seeker. His father, Jake, has the mystical gift of finding water, a gift handed down from son to son in his family. His mother, Delilah, died while giving birth to Amos but appears repeatedly in the novel as a ghost visible to those women who care for her son. Because his father is away most of the year trapping and dowsing, Amos is raised by his childless aunt and uncle at an Indian mission. Amos is an unusual child who has inherited both his mother's gift for drawing and his father's gift for dowsing.

Life on the frontier was not easy, with a smallpox epidemic killing off not only a slew of Indians but also Amos' aunt, the only mother he has known. His care is given over to neighbors, until his father comes back to town with a new wife, Blue Owl, a Shoshone Indian. Amos, who wants to stay where he is, joins his father and Blue Owl in their itinerant lifestyle, until, a few years later, his father decides to join a wagon train to the Oregon territory as a scout.

The second half of the book tells the story of the journey on the Oregon trail; almost fourteen by this time in the story, Amos' journey takes him from a boy to a man. From the trail's jumping off point in Independence, Missouri, Amos' father recruits a diverse group of people for their wagon train, characters who will populate the rest of the book. Among them are a British family with a young girl, Gwendolyn, whose face has been disfigured by her father's abusive behavior. Also joining the group is a beautiful young girl Jubilee, her deaf brother, and her parents. Amos is enchanted by Jubilee, but Blue Owl knows that she is not meant for him.

Holt brings us into the preparations for this almost unimaginable journey--the purchase of supplies, the outfitting of wagons with oxen or mules, the decisions on which route to take, even the preparations of coffins of cloth, in case the worst happens. We see the travelers' distrust of Blue Owl; many had never seen Indians up close.

The action in the book steps up as the wagon train leaves for Oregon; terrible accidents, sickness, death, buffalo hunts, and young love are among the experiences that turn young Amos from a boy to a man. At the conclusion of the book, Holt takes us to 1859, when we see Amos, now with his own family, carrying on the family tradition of dowsing, "as his father had done, as his father had done before him...the gift never failed Amos."

This is a beautifully written, poetic tale that I would categorize as literary fiction for young readers. The book starts out with a very quiet, slow pace, and I can easily imagine many children abandoning the book after the first 25 pages or so unless they are required to read it for class. The story certainly would fit well into curriculum units on Western expansion, the Oregon Trail, and other pioneer themes, but the book does not have the action-packed pace that many children are accustomed to in other books. I do not see this book as having broad child appeal, but I can imagine that it might fare well in the awards season, since its more leisurely style may appeal to many adult readers of children's books.

Also, the book does have an unusual mix of paranormal elements with historical fiction, which may appeal to some readers. Not only do we have Amos' mother, who appears throughout the book as a ghost, but also the phenomenon of dowsing in general. Since I was not familiar with the word, I did a bit of research on the Internet. Apparently Holt's husband and father-in-law are both dowsers, but other than sharing this fact in the acknowledgments, there is little background provided on the subject. From Holt's book, I didn't quite realize that dowsing, also known as water witching, is considered a form of divination. According to the Sceptic's dictionary, dowsing has been around for thousands of years and there are large societies of dowsers in America and Europe as well as other parts of the world. However, limited scientific studies have shown that the dowsers do no better than chance and no better than non-dowsers in locating water. Here is a contemporary photo of a dowser using a tool much like Amos might have used: 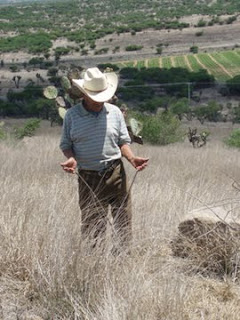