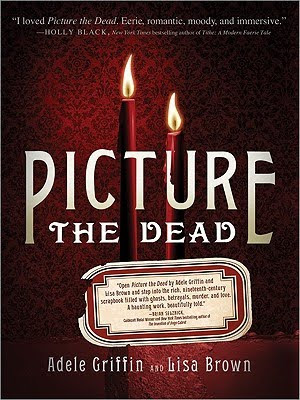 Adele Griffin and Lisa Brown have written a unique illustrated young adult novel that is difficult to categorize. It's carefully researched historical fiction but also a ghost story and a mystery with graphic novel elements as well. With illustrations that mimic the look of a Civil War scrapbook kept by our heroine, our story is told in the first person by orphan Jennie Lovell, who together with her twin brother has been raised for the last four years by her aunt and uncle alongside their two sons, Will and Quinn. Before the novel opens, Jennie and Will have fallen in love and become engaged.

Jennie's girlish dreams of happiness vanish as all three young men in the household go off to fight for the Union cause. First her brother dies of disease (which killed many more soldiers than did the battles themselves), then her cousin Quinn staggers home with a terrible wound to his face and the news that her fiance, Will, has died in combat. Or has he?

Jennie soon realizes that Quinn has a secret he's not telling--"and the dead cannot defend themselves." With the death of her fiance, Jennie has no status in the household. She writes:

I am sixteen years old, nearly grown, my school days finished, my fiance dead on the battlefield, my future as valuable as a wooden nickel.

She tries to make herself useful as a nurse to Quinn, and helps with various household tasks, becoming more like a servant than a member of the family.

But when her uncle asks Jennie to contact a photographer who also has a reputation as a medium, strange things begin to happen. Is Will trying to communicate with her from the grave, or is the spirit photographer playing tricks on her? How can she explain the mysterious events that lead her to discover a lost locket, Will's last letter, and perhaps the secret as to how Will really died--not on the battlefield at all, but as a prisoner at the infamous Andersonville prison camp?

There is certainly no shortage of novels for young people about this period, but Picture the Dead, with its genre-bending story, makes an important contribution to Civil War novels and would be an excellent purchase for school or public libraries, as well as for any reader who enjoys a good mystery and ghost story.

What is unique about this book is the way the author/illustrator integrate both spiritualism and photography into their tale, both of which played a critical role in this time period. Spiritualism, or the belief that the living can communicate with the dead through mediums, attracted enormous numbers of followers during this time period, capitalizing on the millions who grieved for loved ones lost during the war. Photography, too, was tremendously important at the time; the Civil War was the first major combat to be widely photographed, with teams of photographers sent out to cover the action. Because of the unwieldy equipment, photographers could depict only camp scenes, preparations for or retreat from action, or the horrifying aftermath of battle.

In this novel, the many illustrations are integral to the story, even providing clues to the mystery; Brown based her images on Civil War-era photographs from the Library of Congress. Here's an example: 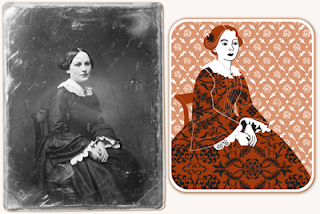 In fact, the models for the different characters are one of the many topics that can be explored on the book's terrific website, which also includes lots of additional information about the Civil War, the authors, photography during the period, and more, as well as useful links to other informational sites.

An interview with Lisa Brown about Picture The Dead can be found here:

To read the first chapter of this book, click here.
Posted by Fourth Musketeer at 5:00 AM