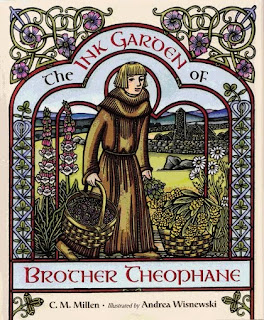 In the Mourne mountains of Northern Ireland, a young monk is given the task of making ink for the manuscripts that are laboriously hand-copied in the monastery. Inspired by nature, he experiments with making vibrant colors from plants and flowers in the forest, allowing the monks to cover their pages with "heavenly hues." The simple story is told in a verse style that reminded me of Ludwig Bemelmans' classic Madeline stories. The book begins as follows: "In the mountains of Mourne, up twisted old bends, past blackberry brambles and ancient wood glens, there stood a tall tower-a circle of stone-where holy men lived, wearing simple brown books, eating simple brown bread, and saying their prayers by their simple brown beds." I almost expected the next part to talk about twelve little girls in two straight lines.

The text is interspersed with lovely, brief poems by the fictional Theophane; these poems are based on works originally written by medieval monks in the Irish language and adapted by Millen. Here is an example: "No great house is finer than my home within the wood. I give thanks for all that God has given for our good." Readers can tell which poems are written by Theophane since they are set in a different typeface and appear on antique-looking scraps of paper set into the illustrations.

The author also includes a useful afterword which provides background information on monasteries in Ireland and their importance in preserving many of the great works of antiquity. She also briefly describes the process of manuscript illumination, and provides further bibliography and websites for those readers interested in further exploring the topic.

While the text of this book is well-written, it is the illustrations for this book that are truly extraordinary. The artwork looks like woodcuts but is actually first hand-drawn on vellum and then cut out from the paper. This is Wisnewski's third picture book for children. In an interview, she describes her technique as follows: "When I have tweaked the sketch to my satisfaction," she says, "the design is transferred onto a black, clay-coated paper. Most of the design's details come out in the cutting process, for which I use a #11 X-acto blade and lots and lots of patience." When a cut is complete, the design is transferred to a magnesium plate, which is then printed on a press built by the artist's own husband. Finally, the artist uses watercolors to hand-color the print. This intricate process produces exquisitely detailed artwork which reflects the style of medieval manuscript illumination.

Here is an example of a two-page spread from the book: 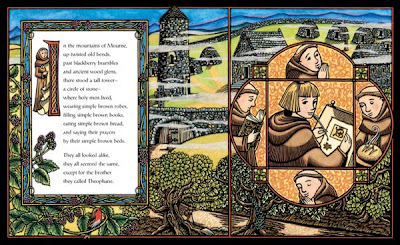 Highly recommended for school and public libraries, this book would also be terrific for home-schoolers since it could be a springboard for many other lessons.
Posted by Fourth Musketeer at 5:00 AM

Get daily suggestions and guides for making THOUSANDS OF DOLLARS per day FROM HOME totally FREE.
CLICK HERE TO FIND OUT

SwagBucks is the biggest get-paid-to site.