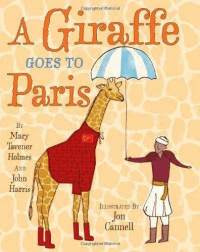 This charming picture book tells the true story of Belle, a giraffe presented by the great pasha of Egypt to the king of France, Charles X, as narrated by Atir, her Egyptian caretaker.  But how to transport a giraffe all the way from Egypt to Paris?  First, she had to be transported down the Nile along with her entourage of three cows (to produce milk for her to drink) and two antelopes (to keep her company).  Then, a special hole had to be constructed in the deck of the ship, so Belle could be kept below but still have room for her long neck!  When she finally arrived in France, the citizens of Marseille marveled at this strange animal.  No one in France had ever seen a giraffe before.

But how to get her to Paris? It was decided that she should walk the 500 miles across France, equipped with a special raincoat and boots to protect her from the elements. Belle's entourage attracted curious crowds all along the journey. When she finally arrived in Paris, 30,000 people came out to greet her, and Paris went crazy for giraffes, with Belle inspiring songs, poems, paintings, pottery, jewelry, and even a giraffe shaped piano and a giraffe hairdo! When Belle finally met the king in July, 1827, she ate rose petals from his hand.

Belle lived for 18 years in Paris, housed at the Jardin des Plantes, where a special home for Belle and her keeper was constructed in the Rotunda.

This is a delightful picture book to share with elementary school-aged students; the author is an art historian and museum curator who has also written My Travels with Clara, another story about an exotic animal, in this case a rhinoceros.   The book features whimsical watercolor and ink illustrations combined with photographs of actual objects from the period, such as a barber bowl decorated with Belle and her keeper, Atir.
Posted by Fourth Musketeer at 5:00 AM