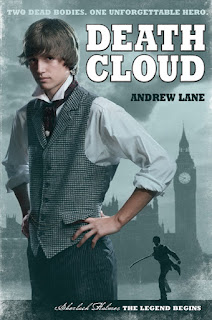 Recommended for 10 and up.

Sherlock Holmes is one of the most beloved fictional characters ever created, and the original Arthur Conan Doyle stories remain popular, as do many spin-offs in both books and film for adults and young people. A new series by British writer Andrew Lane imagines Sherlock as a fourteen-year old boy solving his first murder mysteries. The first volume in this series, Death Cloud, starts off a bit slowly but soon turns into an intriguing murder mystery.

Andrew Lane writes that his intention with this series is "to find out what Sherlock was like before Arthur Conan Doyle first introduced him to the world. What sort of teenager was he? Where did he go to school, and who were his friends? Where and when did he learn the skills that he displayed later in life – the logical mind, the boxing and sword-fighting, the love of music and of playing the violin? What did he study at university? When (if ever) did he travel abroad? What scared him and who, if anyone, did he love?" Arthur Conan Doyle, notes Lane, gave away little about Sherlock's youth in his published short stories and novels, except a few hints here and there, therefore giving Lane considerable creative license to create the early years for this beloved character.

Set in 1868, when our hero is fourteen, our novel opens with Sherlock at boarding school.  But instead of going home for his summer vacation, he finds out from his brother Mycroft that their father has been posted to India, their mother is "unwell," and Sherlock will have to spend the summer with his peculiar aunt and uncle--who he's never even met--in Hampshire. The only bright note seems to be that the food is better than at school.

But things won't be boring for long, as Sherlock makes friends with a local boy, Matty, who's been witness to a strange mysterious smoke and a dead body covered in boils. Has the plague come back? Matty serves as a younger version of Watson in this story, assisting Sherlock with his investigations. Sherlock is also helped by his American tutor and his feisty and independent daughter Virginia, Sherlock is soon involved with fire, kidnapping, espionage, and murder. Will his powers of deduction help him solve his first murder, while uncovering an evil plot to bring down the British Empire? (this seems more James Bond to me than Sherlock Holmes, but perhaps that's just a contemporary perspective!)

I should disclose that I have not read any of the original Sherlock Holmes stories, but that may be the case as well with the intended audience for this series, teens and tweens.  This new series is not the first about Holmes to be aimed at teen readers, but is the first such series endorsed by the Arthur Conan Doyle estate. (A different series for teens,the award-winning The Boy Sherlock Holmes, by Shane Peacock, was first published in 2007 by Canadian publisher Tundra Press and has four volumes to date.  I have not read any of the titles in that series but it would be interesting to compare and contrast how both authors imagine Sherlock as a youth).  And then of course we have the acclaimed Enola Holmes mystery series by Nancy Springer, concentrating on Sherlocks' much-younger sister, Enola, a talented detective in her own right.

Lane's series offers plenty of action, as well as laying the ground work for Holmes' later powers of deductive reasoning (we can see the beginnings of his talents in this book).  It's a good entree into the Victorian stories for younger readers, and may get them interested in exploring the originals.

An interview with Andrew Lane about this series appears at The Book Zone for Boys.

The British website for the series can be found at youngsherlock.com, and includes information on the next volume in this series, Red Leech, as well as a book trailer.

Death Cloud was recently picked as a Spring 2011 Kids' Indie Next choice from Indiebound.org.

I really enjoyed this book and look forward to more in the series. You should try the Young Bond books by Charlie Higson (Silverfin) is the first one--they take place in the 30's. Good stuff!

I did like this one, although the British cover is a lot better. This looks like "Justin Bieber as Sherlock Holmes"!

LOL! That's a good one--I hadn't thought of the Justin Bieber connection but you're totally right!

Bieber? Not a lot of hardcore fans would be excited at that! But surely, they would still read it for the action and crime-fighting suspense!