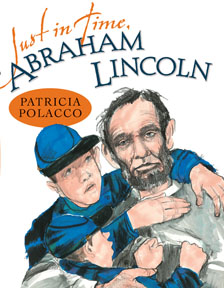 
Beloved author-illustrator Patricia Polacco returns to the Civil War in her newest picture book aimed at older readers.  This story, suitable for upper-elementary school-aged children, follows two brothers, Michael and Derek, who visit the Harpers Ferry Civil War Museum with their grandmother.  Initially annoyed when their grandmother tells them that on this trip there will be "no music, no texting, no tweeting, no e-mailing," they decide that the Civil War was "way cool" when they see the guns and cannons in the museum.  Soon they have a chance to slip into some Union uniforms, and they're told by the eccentric museum director that when they step through a door, they'll find themselves in Antietam just after the battle.  It's a game, he tells them, and they're not allowed to tell anyone they're from 2011.  Also, they have to make sure to come back before sunset.

But when they pass through the door, they're ordered to help photographer Matthew Brady and his assistant, Gardner, who are there to photograph the battlefield and the President's meeting with General McClellan.  The boys can't help but wonder where on earth the game found an actor that looks so much like President Lincoln.  When the boys look with shock at all the dead bodies, they realize this is no game, and soon they are comforting President Lincoln himself, who is agonizing over all the death and destruction he sees.  Derek can't help himself--he tells Lincoln that the North will win, and that one day, a black man will be president!  Derek and Michael must rush to get back to the present, where their grandmother insists that they have participated in a reenactment, where groups act out important battles of the war.  But when the boys examine the photo of Lincoln and McClellan in the museum--they find a surprise that might validate their trip back in time.

Patricia Polacco knows how to tell an engrossing story, and kids will certainly enjoy this time-travel story about two ordinary boys who wind up meeting President Lincoln and seeing one of the most devastating battles of the Civil War (Antietam was the single bloodiest day in the war, with almost 23,000 casualties).  Her signature style artwork, done in pencils and markers, of the battle scenes is particularly powerful (you can see many of the 2-page spreads from the book on Polacco's website), although the cover image of Lincoln brought to my mind how during his lifetime Lincoln was often called in his own day an ape, baboon or gorilla.  Somehow in Polacco's cover artwork Lincoln has more than a little bit of a chimp look about him, don't you think?

The book includes a brief bibliography and an author's note, in which Polacco gives additional details about the history of Antietam that are not covered in the story.  Most importantly, she describes how she plays a bit fast and loose with historical accuracy in this time-travel tale; for example, by the time Lincoln visited the battlefield, two weeks after the event, all the bodies would have long been gathered up by both sides for burial.  I will allow her some dramatic license to mold her story, although in general I don't like when authors of historical fiction change the timetable of actual events, since we can't be sure if the audience will actually read the author's note at the end of the book.

What do you think about historical fiction where the author plays with the timetable of events?  Please leave a comment below.
Posted by Fourth Musketeer at 5:00 AM

I love, love, love Patricia Polacco! I didn't know about this book so thank YOU for posting on it!