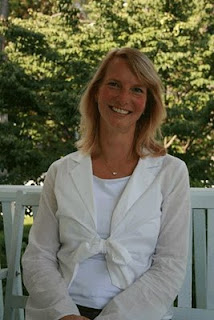 Author Kristin O’Donnell Tubb describes herself on her webpage as a “dork who would still be going to school if they’d let me. But they won’t (cause that’d just be weird) so I write historical fiction instead. All of the research, none of the quizzes.” Selling Hope is her second book for young people; her first novel, published in 2008, was Autumn Winifred Oliver Does Things Different.

Q:  Thanks so much for joining us at The Fourth Musketeer!

A:  Thank you for inviting me, Margo!

Q:   Please tell us a little bit about what inspired you to set a story during the comet hysteria of 1910. Also, what made you want to combine that event with a vaudeville setting?

A:  The inspiration for Selling Hope came while I was researching an activity book I was writing for Dalmatian Press called Space: An A+ Workbook. The topic of Halley’s Comet was to be included in the workbook, and as I researched it, I discovered that Earth actually passed through the tail of the comet on May 18 and 19, 1910. This was the first recorded case of such a phenomenon, and because the population didn’t know what to expect, many began prophesying the end of days. Others cashed in on that fear, selling everything from gas masks to “comet pills.” The moment I read those words – comet pills – I knew it was a story I’d like to tell.

But I needed a reason why my main character, Hope McDaniels, would sell pills like those. She is, essentially, orchestrating a hoax. So she needed to be desperate for money, or else she’d just be this horribly unlikable person! When I researched the era a little more, I discovered the popularity of vaudeville, and the grueling work schedule of the performers. They often performed the same act every day of the week, four times a day, for years on end. That gave me Hope’s motivation: she wants desperately to escape this lifestyle and have a real home.

Q:   Could you envision a sequel to Selling Hope? I, for one, would like to know what happens to her after the book ends!

A:  Thank you for that! I don’t plan on writing a sequel, but I do miss spending time with Hope and Buster and Nick and Cross-Eyed Jane!

Q:  Hope’s father is a magician, and does a lot of stage illusions using Hope as an assistant. How did you research how these magic tricks were done?

A:   Whew – that was tricky, pardon the pun! Magicians are known to be excellent secret-keepers, and even in this day and age, where secrets abound on the Internet, it was difficult to find the key behind many of these tricks. Several of the tricks, and the secrets behind them, I found on YouTube (and yes, I consider myself very lucky to have a job in which watching YouTube clips counts as research!). Others I found on varying websites and in magic books. But in some cases, I found a description of a really cool trick, but I couldn’t figure it out or find its solution. In those instances, like in the disappearing/reappearing alarm clock trick, I left the secret a mystery, even to Hope. I’m fascinated by magic and hope readers enjoy that aspect of the story!

Q:   What were some of your favorite books as a child? Were you especially interested in history and historical fiction?

A:   My favorite books as a child remain some of my favorite books to this day. I loved A Wrinkle in Time by Madeleine L’Engle, A Bridge to Terabithia by Katherine Paterson, and The Westing Game by Ellen Raskin. I also adored Starring Sally J. Freedman as Herself by Judy Blume. It’s that book, I think, that started my love of historical fiction.

Q:  Tell us something that those of us who live in California would never know about living in Tennessee.

A:  Well, I know I’m biased, but Tennessee has the most amazing Autumn you’ll ever see. East Tennessee is home to part of the Great Smoky Mountains National Park, and the trees turn every shade of color between purple and yellow. It’s like looking at a sunburst. So that, and the fact that Tennessee is looooong. The drive from Nashville to Canada is almost equal to the drive from one end of Tennessee to the other! So East Tennessee is very different than West Tennessee. I like that diversity.

Q:  How did you happen to choose the different real-life vaudevillians who populate your story, particularly Buster Keaton? Did you watch all his movies for research, or go to the Buster Keaton Society convention?

A:   I grew up watching Buster Keaton films on a reel-to-reel projector in a church basement on small-town Saturday nights. He and his pork-pie hats always stuck with me, I suppose, and when I started researching vaudeville, his name reappeared over and over as one of the greats. He was literally born on the circuit, in a boarding house in Kansas City, and he started performing at age three! The more I learned, the more fascinated I became with him and his famous Face of Stone.

Buster’s movies came later, of course, than 1910, so I didn’t refer to them as much as I did the herky-jerky shorts that have been posted on YouTube (again, with the YouTube!) from his earlier sketches. The bit described in Selling Hope is from the movie “Steamboat Bill, Jr.” Mr. Keaton’s fans are so loyal that there is a even Buster Keaton Society and annual convention, which I’d love to attend someday! I hope that the portrayal of Buster in Selling Hope makes his fans smile.

As for the other performers, I wanted to include a well-rounded “bill” – the types of performers that would have actually travelled together. And of course I selected the performers who were the most interesting, like the Cherry Sisters, who made awful singing famous, and Burt Savoy, the most famous female impersonator of that era.

Q:  What is the funniest question you have ever been asked at a school visit or author event?

A:   I almost always get asked how much money I make. I also get asked if I know J.K. Rowling or Stephenie Meyer. I was once asked how old I was, and I responded, “How old do I look?” The child was too quick for me, responding, “I’m not answering that!” My favorite question ever, though, came from a quiet boy who approached me after the regular Q&A was done. “Ma’am?” he asked. “Who’s Byron?” He was pointing to the dedication page of Autumn Winifred Oliver Does Things Different. Just the way he asked it, with such sincerity, it melted my heart. (Byron is my husband.)

Q:  What is the next writing project you will be working on?

A:  Right now, I’m waiting on notes from my editor on my next book, The 13th Sign. It’s a change of pace for me, as it’s a fantasy. In the book, 13-year-old Jalen Jones discovers and accidentally unlocks a long-forgotten (and historically accurate!) 13th Zodiac sign, Ophiuchus. In doing this, she changes the personality of everyone on Earth. It’s been a blast to write, and I’m hoping it’s one that readers will enjoy.
Posted by Fourth Musketeer at 5:00 AM

Thanks for the great interview, Margo. I will add her books to my to-read-when-I-return list.