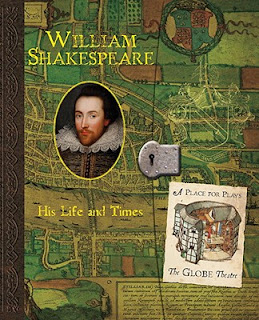 Recommended for ages 8 and up.


This handsome interactive volume, similar to the "Ology" series also published by Candlewick (the highly popular Pirateology, Dragonology, etc.), purports to be William Shakespeare's personal scrapbook, put together in April, 1613, on the eve of his retirement from London to Stratford-upon Avon.

The book is filled with all kinds of fun envelopes and tiny books to open and peruse, as well as a plethora of color illustrations.  Candlewick provides a You-Tube video in which each page is turned and the viewer can see how various parts of the book open, allowing potential readers to see the layout of the book without bothering to visit the bookstore.

Written in a kind of mock-Elizabethan style, Shakespeare writes his reminiscences for the benefit of his daughter, Judith.  Sidebars supplement these faux memoirs with facts, such as we know them, about Shakespeare's life, although the authors are careful to note that, for all his fame, we really know relatively little about Shakespeare's life.  Nonetheless, the Bard recounts his childhood days in Stratford, including frolicking in the Forest of Arden with his siblings, his school days, courting and then progresses to talking about his marriage to Anne Hathaway, the birth of their children and the loss of his beloved son Hamnet at the age of 11.  Shakespeare's scrapbook touches on a wide variety of topics, including life in London, the Globe Theatre, his fellow players, love and war, feasts and fun in Elizabethan England, life at court, ghosts and fairies, and more.  The scrapbook concludes with Shakespeare's Last Will and Testament, and a letter from Shakespeare to his daughter Judith.

The book is not really laid out in a manner that would make it easily usable for a school biographical report on Shakespeare, but it could certainly supplement a more conventional biography and would make a valuable and entertaining classroom resource for teachers to have on hand when studying Shakespeare plays.  Although the book is suitable for ages 8 and above, it may be more likely to appeal to students who have already begun studying Shakespeare in school (here in California that's in middle school).  If a parent were taking a child to their first Shakespeare performance, this scrapbook would also be excellent to read together to provide historical background.  Brief excerpts from various plays are included, as are synopses of some of his key works.

As the holidays approach, I can't help but think what a lovely holiday gift this would make to a favorite English teacher!

For more on Shakespeare, don't forget to explore the Folger's Library's website, which includes an extensive section for students and families, as well as an outstanding array of resources for teachers.

Young readers interested in reading more about Shakespeare's life might enjoy Bard of Avon:  The Story of William Shakespeare, by Diane Stanley and Peter Venemma (Harper Collins, 1998), or
Shakespeare:  His Work and His World, by Michael Rosen (Candlewick, 2006).

For more great non-fiction books for young people, check out the links to this week's Nonfiction Monday posts at In Need of Chocolate.
Posted by Fourth Musketeer at 5:00 AM