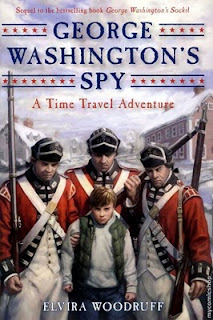 
Looking for exciting time travel books for your young patrons or students who've read their way through the Magic Tree House, the Time Warp Trio, and others series of that ilk?  Elvira Woodruff's George Washington's Spy might just fit the bill for these readers.  A magic rowboat at a lake near their home sweeps fifth grader Matt, his annoying little sister Katie, and four friends from their Nebraska home back to 1776 Boston, where they land in a freezing and dark forest and their magic boat quickly disappears.  It's a dangerous time, with the British in Boston and George Washington and his troops trying to drive the British from the city.

The boys go to look for help for Katie, who has injured her foot, while the girls remain behind, but with the freezing weather, they must seek shelter when the boys do not quickly come back for them.  They are fortunate to be taken in by a kind woman, Mistress Hewson, and her young daughters, who, through a series of funny misunderstandings, believe that the girls are related to the British Earl of Essex.  They take the three girls into their home, where they try to blend in by acting "colonial."  They soon discover that the family who is so kind to them is a Loyalist family--enemies of George Washington and the Patriots!

And what has become of Matt and his friends?  They've been taken prisoner by a group of Patriots, where they meet Benjamin Franklin, and Matt is drawn into George Washington's spy network, complete with letters written in invisible ink, messages hidden in buttons and secret passwords.  Can Washington make the British Redcoats leave Boston, and will Matt, Katie, and their friends ever get back home?

The author does not shirk from exploring the complex politics of the time, when even Benjamin Franklin's own family was split, with his son siding with the Tories and the King.  Everything is not black and white, like the children thought from history class.  Mistress Hewson "may have been a Tory, but she acted like any other mother."  At the book's conclusion, the children ponder the moral complexities of the Revolution, wondering how good people like the Hewsons could be America's enemies.  "I thought choosing sides would be so simple, but it's not," remarks one of the girls.

While this title is a sequel to Woodruff's George Washington's Socks, there's no problem reading this one without having read the earlier book.  I particularly enjoyed how Woodruff weaves real historical figures into the story, including Washington (who makes a brief appearance toward the end) and Franklin.  In addition to offering plenty of suspense and adventure, the author fills her book with plenty of humorous details, such as the kids' repeated tries to get their cell phones to work in 1776 (out of range and no signal light up on the phone), their cravings for pizza, chocolate, and marshmallows, Benjamin Franklin trading his boots, with buckles made by Paul Revere, for the sneakers of one of the time-travelers, and the Hewson girls' fascination with nail polish and underpants,   But in addition to humor, we also see the harshness of the times, with prisoners in the stocks, smallpox epidemics, public floggings, a character being tarred and feathered, while another is hung for treason by the British.

Author's notes provide historical details on a number of topics, including Loyalists, colonial spies, and the Battle of Dorchester.  The book also includes a glossary of revolutionary-war vocabulary used in the book, as well as a brief bibliography.

This book would be an excellent choice for students interested in history, adventure stories, or time travel.  I can also imagine this book as a very fun and engaging read-aloud for teachers to use in the classroom.  Also, this book would be appropriate for children who are younger than 8 but who are advanced readers for their age.  And at 229 pages, this novel won't intimidate reluctant readers.

A teacher's guide can be found on the author's website.
Posted by Fourth Musketeer at 5:00 AM

I have George Washington's Socks waiting for me in my tbr pile....and then I'll look for this one!