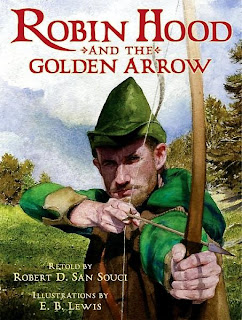 
Award-winning author Robert D. San Souci, perhaps best known for his retellings of traditional tales (as well as his Dared to be Scared series!) and award-winning illustrator, E. B. Lewis  have brought us a gorgeous new oversized picture book based on one of the best-known super-heroes of the olden days, Robin Hood.


In this particular tale, which San Souci adapted from earlier versions (dating to the 15th century), Robin's nemesis, the Sheriff of Nottingham, comes up with what he thinks is a sure-fire method to capture Robin and his band of outlaws:  an archery contest with an arrow of pure gold as the prize.  Sure enough, Robin, who of course is the best archer around, can't ignore the challenge, and he and his men arrive at the contest in disguise.  As expected, Robin is one of the final two archers, but no one recognizes him disguised as a one-eyed beggar.  Will Robin outfox the Sheriff and collect the prize?


This lushly illustrated tale, featuring splendid watercolors of Sherwood Forest, dappled with sunlight emerging from the green trees, as well as its famous occupants, is a wonderful addition to the Robin Hood canon, and should be a popular read-aloud that adults as well as children would enjoy.  For those kids who love contemporary superheroes like Iron Man and Spider Man, this story provides an ideal avenue to introduce them to one of our culture's earliest superheroes.


If this one tale sparks your child's interest in Robin Hood, there are many resources available to learn more about this immortal character.


Online, you might want to start with the following websites:


For listening, the inimitable children's storyteller Jim Weiss has a CD available that combines Robin Hood with The Three Musketeers, perfect for the car or bedtime.  Or to hear the original sung versions of these stories, which were originally told by medieval and renaissance era minstrels, try the Robin Hood Ballad Project.


For reading, there are hundreds of versions of Robin Hood tales aimed at children and teens.  Here are just a few that you may want to explore:


For viewing, don't forget the dozens of feature films made about the legendary hero, who has been played by actors from Douglas Fairbanks, Errol Flynn (my personal favorite made in 1938 by Warner Bros. with costars Olivia De Havilland and Basil Rathbone), Sean Connery, John Cleese, Kevin Costner, and Russell Crowe, among others.  And for the youngest viewers, the 1973 Disney version features Robin Hood and Maid Marian as foxes.
Posted by Fourth Musketeer at 5:00 AM