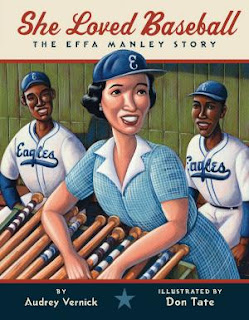 
To complete my "girl power" week on my blog, focusing on books about extraordinary women who bucked society's expectations for women's roles, I'm delighted to highlight a new biographical picture book about Effa Manley, the first--and only--woman inducted into the august National Baseball Hall of Fame.  No, she was not a baseball player herself, rather she was the proud co-owner and manager of the Newark Eagles, a Negro League team, and an advocate for civil rights.

Effa always loved baseball, and after moving to New York loved to see Babe Ruth play for the Yankees.  She was also an early civil rights organizer, establishing the Citizens' League for Fair Play in Harlem, to pressure Harlem's largest department store to hire black salesclerks.  "Don't Buy Where You Can't Work!," said their picket signs.  In 1935, Effa and her husband Abe started a new baseball team, the Eagles, that was part of the new Negro National League that her husband helped to establish.  Effa handled the team's business and attended league meetings, despite complaints from other owners that baseball was no place for a woman.  Her players called her their "mother hen," and she took care of them, even helping them find off-season jobs.

After Jackie Robinson broke the color barrier in major league baseball, the Negro League stated losing fans and top players, and eventually disbanded.  But Effa's efforts on behalf of her players didn't end.  She feared the Negro Leagues would be forgotten, and began a campaign to convince the National Baseball Hall of Fame to consider the best Negro League Players for membership.  Due to her efforts, nine Negro League players were inducted between 1971 and 1977, but not enough according to Effa.  She continued to advocate for dozens of Negro League stars until she died in 1981.

Not until 2006 were many of Effa's favorites, including stars from her team, inducted in Cooperstown.  That year she, too, was inducted.  Author Audrey Vernick writes, "She was recognized for all she did for her players, for her civil rights work, and for getting the major leagues to treat Negro League teams with respect."

This is a terrific book on so many levels; it touches on themes of women's rights and roles, civil rights, baseball history, and so much more.  It would be an excellent book for classroom use or for parents to share with their children, particularly those who are baseball fans.  The vibrant full-color acrylic illustrations by Don Tate, in a style he calls "in between realistic and cartoony," add immeasurably to the book's visual appeal.

For more on the history of the Negro Leagues, see their official website, as well as Kadir Nelson's award-winning book We Are the Ship:  The Story of Negro League Baseball  (Jump at the Sun/Hyperion, 2008).

A new adult biography, as yet unreviewed, of this fascinating woman is due out in 2011:  The Most Famous Woman in Baseball:  Effa Manley and the Negro Leagues, by Bob Luke (Potomac Books, January 2011).