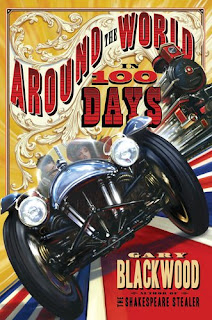 
Recommended for ages 10 and up.

Gary Blackwood, author of the best-selling Shakespeare Stealer series, brings us a rip-roaring historical adventure in this new release loosely inspired by Jules Verne's classic Around the World in 80 Days.

Our hero is Harry Fogg, son of the Phileas Fogg of Verne's tale.  The book opens in 1891 with Harry in jail for reckless driving of his steam-propelled motorcar, The Flash.  Harry, whom his parents want to be a proper English gentleman, likes nothing better than tinkering, preferring "gadgets to guns and horseless carriages to horses."  But the story really begins at his father's gentleman club, where Harry makes a wager no one thinks he can win--that he can drive his motorcar around the world in 100 days.  Since Harry has no money of his own, his father agrees to back the bet, but with a condition--if he loses he must abandon his tinkering and take up a suitable profession for a gentleman.

Soon Harry leaves, accompanied by his boyhood friend, Johnny--a crack mechanic and co-builder of The Flash, and Charles Hardiman, who comes along as an impartial observer to make sure all rules are followed (the vehicle must travel under its own power, except when crossing bodies of water).  They are soon joined by a somewhat mysterious girl reporter, Elizabeth.  Their travels take them across the Atlantic, then crossing the United States, and on to Asia, driving across China, Siberia, Russia, and then  Europe.   Needless to say they meet with many adventures and unexpected mishaps, including possible sabotage, upon their route.  Will they make it back to London in time to win their bet?

Blackwood incorporates plenty of light-hearted comedy as well as suspense into the story, along with colorful Cossack cavalrymen, bandits, and Indian gentlemen wearing turbans.  The author also adds a very contemporary multicultural angle into what otherwise would be a traditional adventure story; our hero, Harry, is multi-racial, with a British father and an Indian mother.  Some of his Indian heritage rises to the surface during his travels, as he learns the value of meditation, for example.

I would highly recommend this title to young people who enjoy adventure stories; with all the details about motorcars and engines, this story will also appeal to kids who, like Harry, enjoy "tinkering."  A strong female character in Elizabeth adds some girl appeal as well.  While this title is best suited for 10 and up, the content and style are also appropriate for younger readers who read above their grade level.
Posted by Fourth Musketeer at 5:00 AM

This book sounds so good! I love the original, and this one sounds like it takes a lot of those fun elements and adds new fun twists. This one is going on the TBR. Thanks!

Ooh-sounds fun! It kind of reminds me of Homer P. Figg-with history and adventure as well as humor.

This looks fantastic! I especially like that it is suitable for boys or girls depending on their interests. Also the diversity of ethnicity is something nice to see in a middle grade book since it's not addressed very often. Fantastic review!