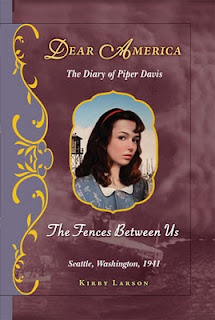 Award-winning author Kirby Larson, author of many outstanding titles including the Newbery winner Hattie Big Sky, offers us the first title in a relaunch of Scholastic's popular  Dear America series.  The Fences Between Us is the diary of Piper Davis, the appealing 13-year old daughter of a pastor at a Japanese Baptist church in 1941 Seattle.  When her 18-year old big brother Hank and his two best buddies (known among themselves as the Three Musketeers) enlist in the Navy, they're sent to Pearl Harbor, where the family thinks they will be far away from any action.  In the meantime, Piper and her best friend Trixie share typical girl worries--does Bud with the gorgeous green eyes who's in their class really like Piper?  The reader knows, though, that trouble is coming, and we live with Piper through the shock of the Japanese bombing of Pearl Harbor, and the terror of not knowing if her brother is alive or dead.

Soon Japanese-Americans she has known her whole life are arrested by the FBI, and sent to prison, without proper charges.  Her life at home is changing too, as her older sister gets married to her sweetheart, who soon ships off to England, and then begins working at Boeing as one of the Rosie Riveters.  And although she's not really supposed to date, Piper's secretly going steady with Bud, who's given her his pin, and she's exploring her love for photography as she studies Margaret Bourke-White for a school report.  But things are about to become much worse for her father's congregants.  Piper watches as the Japanese from Bainbridge Island are the first to go, sent to Camp Harmony, a place where there is nothing harmonic at all.  A former fairgrounds, Japanese-American families sleep in converted horse stalls.  Within weeks all their Seattle Japanese-American friends are also deported to Camp Harmony, and after that to a permanent war relocation camp in Idaho. Piper is surprised that at her school, her classmates carry on as if everything is normal, "as if a quarter of our student population wasn't missing...I know this relocation plan is...meant to help us feel safe.  But when I look around, I don't feel safe; I feel sad," she writes in her diary.

When Piper's Pop decides to join his flock at the Minidoka relocation camp, Piper is distraught and furious with him, but has no choice but to accompany him.  The second half of the book takes place at the camp near Eden, Idaho.  The camp itself "is worse than I ever imagined."  And Piper and her father are not popular in town--restaurants refuse to serve them and landlords won't rent to them because they're "Jap-lovers."  Piper decides to attend school in the camp with the Japanese kids instead of in town, even though they have no chalkboards, desks, or even books.  The camp residents try to make life as "normal" as possible,  but it takes months to even get necessities such as coal stoves or regular toilets for the residents.

Larson provides plenty of details about life on the home front, from civil defense drills, Victory gardens, and the agonizing waits to hear from relatives on the front lines, as well as many details about life in the internment camp that Kirby garnered from personal interviews with camp residents as well as many other sources.  Through all the hardships, Piper learns that "even if we can't do much about the fences that get built around people, when fences get built between people, it's our job to tear them down."

Remarkably, we learn in an afterword that this story is based on the real-life story of Pastor Andy Andrews, who moved from Seattle to Twin Falls, Idaho, to be near his congregation, all of whom had been sent to Minidoka.  This choice was very hard on his family, and author Larson writes "He did what he believed was right, no matter what."  We can all be glad that Larson has chosen to share a story based on such a quietly heroic figure.

This is a terrific addition to a well-loved series, perfect for those readers who have outgrown American Girl and Magic Treehouse but enjoy history-related titles.  As is typical in this series, there is an afterword with additional information and photographs of life in American during this period (1941), as well as links to helpful websites on Camp Harmony, Minidoka, and oral histories of those incarcerated at these camps.  Also, check out Scholastic's new Dear America site for news of other releases in this series and to experience Piper's scrapbook and other activities.  There is also a companion site for teachers.

I would also recommend a related book published earlier this year, Best Friends Forever:  A World War II Scrapbook, by Beverly Patt, which explores the close friendship between two 14-year old girls, one of whom is Japanese-American, during the same time period.

For adults who would enjoy a good novel involving the Japanese community in Seattle during World War II, I recommend the Hotel on the Corner of Bitter and Sweet by Jamie Ford, a 2009 romantic historical novel that tells the story of a young Chinese-American boy who falls in love with a Japanese-American girl on the eve of World War II.

I loved Hattie Big Sky, so I've been meaning to pick this one up. I never read the Dear America series (they were a bit after my elementary school years) but they're very popular at my library!

This is a lovely review, thank you! And for another good read for adults, please check out the stunning book, When the Emperor Was Divine, by Julie Otsuka.

Great review! I really enjoyed this book and am so glad they are publishing this series again.

Thanks! for sharing this.