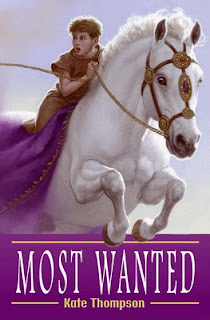 
Award-winning British author Kate Thompson, perhaps best known for The New Policeman, transports us to ancient Rome in her newest book, a slim volume perfect for those just starting out with chapter books.

When the book opens, our hero, Marcus, a humble baker's son, suddenly finds himself holding a magnificent horse--one with a blanket of royal purple, a collar studded with precious jewels, and a lead rope of solid gold.  This is no ordinary steed--this is Incitatus, named as Consul by the crazy Emperor Gaius Caligula, referred to in the novel as Little Boots because he often wore miniature soldiers' boots as a child.

Something big is happening, but all Marcus can do is head for home on the back of the noble horse, who outruns soldiers and jumps over carts to make it back to Marcus' family compound.  With the horse temporarily hidden away in the family bakery, the family learns that there's a rumor the emperor is dead.  And what to do with the horse?  Marcus' grandmother insists he's signed a death sentence for the whole family by bringing Incitatus to their property.  But in the meantime, he's a consul, and must be treated as an honored guest!

Marcus, as Incitatus' new companion, soon is witness to the coronation of the next emperor, Gaius' stuttering uncle Claudius, and saves Incitatus from sacrifice to the gods.  A happy ending is in store as the horse, stripped of his consular ranking, takes on a new role--delivering bread to the people of Rome.

An author's note at the end of the book explains that while Caligula and Incitatus actually existed, Caligula never really made Incitatus a consul, although he threatened to do so.

This book's fast-paced story, with its mix of adventure, humor, and some history as well, should appeal to those children who are just stepping up from beginning readers to chapter books.  The book is abundantly illustrated with whimsical, cartoon-like black and white drawings by Jonny Duddle which add both humor and immediacy to the narrative.  It's also a good choice for horse lovers who are looking for something different than the usual girl-focused horse stories.

For other reviews, see There's a Book and Kirkus.  For a recent interview with Kate Thompson, see Publisher's Weekly.
Posted by Fourth Musketeer at 5:00 AM

I have this one on hold at my library. I enjoyed Highway Robbery. Your review makes this one sound just as good. Thanks!