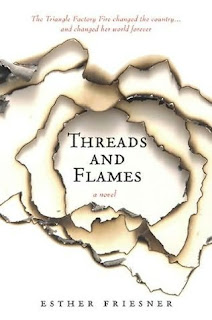 
2011 marks the 100th anniversary of the Triangle Shirtwaist factory fire, one of the most important events in American labor history.  This anniversary makes the release of Threads and Flames by Esther Friesner particularly timely.

Friesner's novel opens in 1910, with thirteen-year old Raisa, recently recuperated from typhus, leaving her Polish shtetl to meet up with her sister Henda in America.  After a long and difficult journey by cart, train, and ship, Raisa finally arrives in New York, only to learn that her sister has disappeared.  With no job, no family, nowhere to live and unable to speak English, she seeks refuge in a synagogue, where she meets a kind young rabbinical student, Gavrel, whose mother just happens to have room for boarders.  Soon Gavrel helps Raisa get a job where he works, at the very modern Triangle Shirtwaist factory in the Asch building.  In addition to working long hours at the factory, Raisa goes to evening English classes where she dreams of becoming a teacher.  She still hopes to find her sister, but how to do so in such a huge city?  In telling Raisa's story, Friesner paints a rich picture of Jewish immigrant life at the turn of the century; we can almost smell the food at the markets and see the celebrations for the different Jewish holidays.

But Raisa's life changes forever on a March afternoon, when fire breaks out on the 8th floor of the Triangle factory.  Hundreds of desperate workers tried to get out, but the doors on the stairway that could have provided a safe exit were locked--locked because the owners were afraid the young girls who worked at the factory would steal.  Some, like Raisa, escape on the elevator, running outside only to see the horrific sight of bodies plunging through the air, with their clothes and hair on fire.  The fire department was quickly on the scene, but the ladders wouldn't reach the top floors, and the nets and blankets that firemen spread to catch the young women couldn't withstand the force of their falls.  The horror of the fire's aftermath is vividly captured by Friesner, as survivors try to discover who has lived and who has died in the fire, going to huge make-shift morgues to try to identify the bodies, some of which were burned beyond recognition and never identified.  In all 146 workers died, mostly Jewish and Italian young women who were recent immigrants like Raisa, some as young as fourteen years old.

I could perhaps quibble about the ending of this engrossing novel, in which all the loose threads of the story are neatly tied together, but despite the perhaps unlikely ending, I felt this was a well-realized novel with characters that will greatly appeal to the intended teenage audience.  Because the reader grows to care deeply about Raisa and her friends, the tragic events of the story come vividly to life.

While the Triangle fire led to many changes in safety requirements for workers in the U.S., disasters of this sort are sadly not a thing of the past.  Safety standards are woefully inadequate in many other countries, where sweatshops continue, many with locked doors during working hours just like at the Triangle factory.  For ninety years, the Triangle fire was considered the worst in labor history; unfortunately, in 1993, the death toll from a terrible fire at the Kader toy factory in Thailand in which 188 workers were killed, nearly all of them very young women, surpassed Triangle in the record books.  And such disasters continue, particularly in the garment industry, where piles of fabric and clothes are easily flammable and safeguards are often ignored in order to manufacture cheap clothes for the Western market.  In December 2010, in Bangladesh, workers jumped to their deaths from a garment factory fire at a facility which makes clothing for the Gap and other U.S. companies.  At least 27 workers died and over 100 were injured in this latest disaster, which followed a February fire at a sweater factory that killed 21 people and injured many more.

Novelist Esther Friesner is perhaps best known as a fantasy writer, but has previously published several works of historical fiction for young people about ancient Egypt, including the 2010 release Sphinx's Queen.   In her afterword she explains her motivation for writing Threads and Flames, noting that although the Triangle Factory no longer exists, sweatshops still flourish all over the world; "While such things exist," she writes, "the core of the Triangle fire--human life demeaned, exploited, and lost--is still with us."
A variety of events around the country are being held to commemorate the 100th anniversary of the Triangle Shirtwaist factory fire.  For details, see Remember the Triangle Coalition's website.  In addition, a conference, Out of the Smoke and the Flame:  The Triangle Shirtwaist Fire and its Legacy, which will look not only at the historical events of 1911 but also at global sweatshop issues today, will be held at City University of New York on March 24, 2011.


Other novels for young people depicting the Triangle Shirtwaist fire include:

A variety of non-fiction accounts of the disaster are also available, both for young people and adults.  The newest of these comes out in February 2011:  Flesh and Blood So Cheap:  The Triangle Fire and its Legacy by Al Marrin (Knopf Books for Young Readers, 2011).

This looks like a very interesting book. Every time I walk by the Triangle building I think about that fire and those poor women working there. It was truly tragic.
And thanks for the heads up about the conference at the City University. It is my alma mater, but I don't keep up with events and I would like to go.
Your post today was particularly informative for me.

Thanks! for this great review.

Ooh, this sounds very interesting! Thanks for the review.

I read Uprising by Margaret Haddix this year. Same setting and event. Could not imagine the sadness of researching and writing these stories.

Love the cover on this!