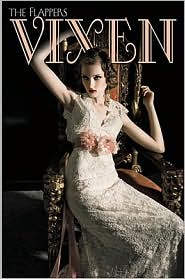 The Roaring 20's are definitely in vogue this fall in YA fiction, with major releases of the first volume in two different series:  Vixen (The Flappers series) by debut novelist Jillian Larkin, and Bright Young Things, by Luxe series author Anna Godbersen.  The books are remarkably similar in some ways:  both series feature the interlocking stories of three different girls as main characters, not to mention that they both feature glamourous young girls on their covers.

Vixen tells the story of Gloria Carmody, a 17-year old socialite in 1923 Chicago who attends an elite finishing school for girls and is about to get married to the very eligible bachelor Bastian Grey.  But before she resigns herself to the dull world of marriage, she's determined to have some fun, because she's sick and tired of being her parents' "perfect little girl."  Soon she's hanging out in "the rebel side of heaven," the Green Mill, an illegal speakeasy filled with glittering, glamorous flappers, gangsters, and jazz musicians.  On her first trip to the Green Mill, she is struck by the sexy black pianist in the jazz band, Jerome Johnson, and soon Gloria secretly becomes the vocalist with the club's all-black band.

Living at Gloria's house, ostensibly to help plan her wedding, is her cousin Clara, who had run away to New York City from her home in Pennsylvania and conducted herself scandalously; she's now has been exiled by her family to Chicago.  Clara decides to reinvent herself as the "sweet-as-pie and innocent-as-a-lamb farm girl, with aspirations to be a humble schoolteacher" coming to the city for the first time.  The reader knows it's all a lie, but what exactly happened to Clara in New York remains a mystery...until the end of the book.

Our third main character is Lorraine, best friend of Gloria since forever, who resents Gloria's place in the spotlight since her engagement and is worried she'll be left without a best friend once Gloria gets married.  She's also lusting after their mutual friend Marcus, who doesn't return her affections, but soon is interested in Country Cousin Clara.

But things are messy for these three flappers--we soon discover that Gloria's upcoming marriage is one of economics and convenience only, a business arrangement between Bastian and her father.  In the meantime, Gloria's falling hard for someone as unsuitable as can possibly be--Jerome Johnson the black pianist, at a time when it was unheard of for "respectable" white women to date black men.  Clara's receiving anonymous threatening notes, and what is Lorraine doing kissing the fiance of her best friend?!

The novel's author does a good job of peppering her yarn with plenty of period details, including illicit drinking from dainty little flasks, debutante parties, Buster Keaton movies, betrayed confidences, mysterious threatening letters, dangerous mobsters out for revenge, and more, until a climax that will leave readers breathless for the sequel (Ingenue, to be published in August 2011).

This novel's mix of romance, danger, star-crossed lovers, and the colorful Roaring 20's setting is sure to please fans of series like the Luxe.  I give this novel high marks for sheer entertainment value, and think it is likely to find plenty of teenage fans.