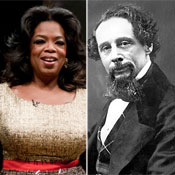 The great American wit Mark Twain once famously quipped that a classic is a book which people praise and don't read.  Oprah Winfrey, great goddess of popular culture, is trying to change all that with her last two book club selections:  Dickens' Great Expectations and Tale of Two Cities.  Entertainment Weekly posed the following question (paraphrasing our friend Dickens)  "Was this the best of picks, or was this the worst of picks?" In his own time, Dickens was the most popular novelist in the world--and I mean popular like Stephen King or John Grisham.  And Dickens is still required reading in many high school English classes; in our own school district, Great Expectations is read in 9th grade Honors English and Tale of Two Cities in 10th grade.  Goodreads lists Great Expectations and Tale of Two Cities as #21 and 23 respectively on its list of most popular high school books.


But do the kids today who've grown up on J.K. Rowling and Stephenie Meyer enjoy Dickens' more ponderous style, with long descriptions and many sentimental characters?  My teenage daughter is definitely in the No More Dickens camp, although she tells me that posting about Dickens on Facebook will provoke a stream of comments from students who hate him and students who love him.  My daughter used Dickens as the subject of an epic poem in the style of Homer (another author assigned in class)...I thought with Oprah's choices it was timely to share her viewpoint with all my friends in the blogosphere.

Dickens, the Dullest Among Writers

Oh muse, heed my call and help me tell the story of Julia, the procrastinator
Who overcame Dickens, the dullest among writers.
Julia scoffed at the newest novel, thinking it would not be a strong adversary,
For she had conquered Shelly, Shakespeare, Bronte, Austen, and more.
Those had been long and arduous battles, yet she had persevered.
The tedium was unbearable, for Dickens, the dullest among writers
Made his pages seem endless, like the labyrinths of the Minotaur.
Julia, the procrastinator, tired quickly, and ignored the homework.
And let it sit, for hours and hours, and eventually days.
Julia the procrastinator realized the day before the first quiz,
that she had neglected to read anything.
Oh, there is still the entire day, and it stretches as lengthy as Poseidon's oceans, she thought.
And thus, she waited until the late night, and had an epiphany.
In order to keep her grade up she must complete the chapters.
She sought out the novel with great determination, but her eyes began to close and
As she lifted the pages, they were as heavy as the burden on Atlas' shoulders.
She called upon Athena, to give her the wisdom to persevere.
Dickens, the dullest of all writers, seemed more malevolent than all of Hades.
As Julia the procrastinator attempted to fight a long battle, through the night.
Even though the light beckoned to be turned off, and her body told her she must sleep
Julia the procrastinator read on and on
Fighting her closing eyes.
When day broke she was still tired
But she had conquered the novel,
And got to sleep during biology.
And how about you?  Dickens fan or not?  Let me know in a comment!

Posted by Fourth Musketeer at 11:06 AM

First, bravo to your daughter for the poem. Well done. Second, I too was forced to study Dickens in HS and found it agony. I did however definitely find my vocabulary increased by his work so perhaps it was worth it? And I do feel it's important to challenge kids even if what they're accustomed to is the likes of JK Rowling.

I had assumed it was immaturity that made me unable to appreciate Dickens in my teens. But then I had to read Bleak House in college which was a mental voyage of the damned for me, and I came to the conclusion I just really don't like the man's books. Compare that to Shakespeare who can be very challenging and confusing however ultimately, I admire and appreciate his incredible work. Perhaps Oprah should have whipped out some Hamlet?

I haven't read a lot of Dickens. I wish I had. I will some day. I'd heard of him of course, and always presumed it to be awful and unreadable. Then a few years ago I attempted Bleak House with an online bookgroup- and I loved it! I only ever got about halfway through, because I really am not very good with books over 500 pages- my fault not Dickens'. I loved the lengthy descriptions, the wonderful characterisations, the fantastic vocabulary and the wonderful names he gives his characters. I've tried to read it again, and only got half way through once more. I now call it the best book I've half read twice. It sits on my bookcase taunting me still (even though I did watch the recent BBC adaptation so do actually know how it ends). One day when I have time, I want to get through it.

In an attempt to finish a Dickens I am currently reading A Christmas Carol aloud to my 10 year old son. He seems to be enjoying it. Although I do find it a little confusing at times- sometimes the odd sentence won't make much sense.

I am intrigued that Oprah picked two Dickens books. They are two of his shorter works, but why pick two not one? I would love to think that I can use this as an excuse to get either one of them read, but I have a busy summer lined up and know that I won't get it done.

A Tale of Two Cities is one of my favorites. My daughter suffered through her reading summer reading assignment of Great Expectations, moaning the entire time. I’ve never read Great Expectations, but I can vouch for A Christmas Carol. Your daughter gets an A for effort in procrastinating. It’s nice that she’s got a sense of humor and a literary background.

Its sad that your daughter find Dickens boring because he's one of my all-time literary heroes. My favorites include: Pickwick Papers, Nicholas Nickleby, A Christmas Carol, and Great Expectations. To me Dickens prose and characters is just as relevant today as it was in the Victorian era especially stories like Little Dorrit that brims with biting satire about bureaucracy that we deal with in America on a day to day basis.