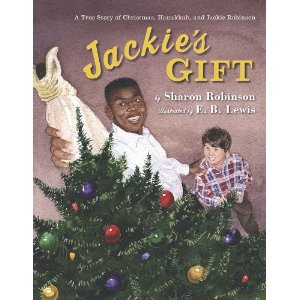 This engaging new picture book for the holiday season offers a touching and funny true story about baseball legend Jackie Robinson, written by his own daughter Sharon Robinson, and illustrated by award-winning artist E. B. Lewis.

Young Steve Satlow is a huge baseball fan, and it's a dream come true when star Dodger player Jackie Robinson and his family move onto their block in their Brooklyn neighborhood.  We learn that some of their neighbors had tried to stop the Robinson family from being able to move into the neighborhood, but Steve's Jewish parents had refused to sign the petition.  Steve and his family befriend the Robinsons, and Steve even gets to go to a Dodger game, sit in the family seats right behind home plate, and walk home with Jackie himself!

When the holidays come around, Steve is invited over to help trim the Robinsons' tree.  When Jackie asks Steve if they've decorated their tree yet, Steve replies that they don't have one, and the subject seemed to be forgotten.  That is, until Jackie Robinson arrives at Steve's house with a Christmas true under his arm.  Of course Jackie doesn't realize the Satlows are Jewish and don't celebrate the holiday.  Although Steve is excited with the gift, his parents don't know what to do, since to them the tree is a religious symbol.  But when Mrs. Robinson comes over with ornaments for them to share, Mrs. Satlow tells them gently that they don't celebrate Christmas.  What could be an awkward moment for all concerned becomes instead a teaching moment about religious tolerance and friendship.

I thought this was a delightful holiday story, enriched by E.B. Lewis' trademark watercolor illustrations, which lend a nostalgic mood to the 1940's setting.  I would recommend this book for Jewish and Christian families alike, since it offers a subtle message of accepting all religious faiths which is well-suited to the holiday season.

The Los Angeles Times and the Seattle Times have picked this picture book as one of their recommended purchases for the holiday season for children and young adults.  You can also hear Sharon Robinson and Steve Satlow interviewed by Neil Simon of NPR at the following link.

For other perspectives on this story, see Lisa Silverman's article in The Jewish Journal, "It's Christmas Time for Chanukah Books."

Some read-alikes that celebrate similar messages include:

Elijah's Angel:  A Story for Chanukah and Christmas, by Michael Rosen, which celebrates the friendship between a young Jewish boy and an elderly African-American barber;
The Trees of the Dancing Goats, by Patricia Polacco, where a Jewish family pitches in to deliver Christmas trees when their Michigan town is hit with a scarlet fever epidemic;
A Chanukah Noel by Sharon Jennings, in which a Jewish girl in a small French village has her family help out a poor Christian neighbor by supplying their tree and all the trimmings.

For more great non-fiction books for kids, check out the Nonfiction Monday links at The Reading Tub.